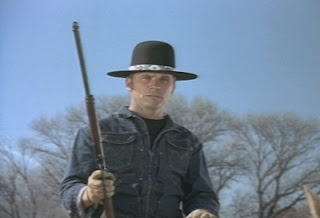 One good thing about “1001 movies you must see before you die” is that you aren’t claiming the ones on the list are the 1001 best movies, at least that's my interpretation of the prime directive. For example, I would have not included Grease or Clueless or Top Gun on the list, but each selction according to his own ability, each choice according to his own needs.

The soundtrack of Billy Jack starts with the satanic band Coven (not Cher!) singing the movie’s theme song “One Tin Soldier.”

An interestingly ironic sentiment for a satanic band, eh? And I just found out the lead singer’s name is Jinx! How cute!

We also find out that Mike and Stuart Posner and Stuart’s son Bernard are killing mustangs and sending the meat to be used for dog food. You don't get much more evil than that! Except poor Bernard can’t actually pull the trigger, which we find out later he can’t do with women either.

Then,the half-breed war hero who hated the war, Billy Jack (played by star-writer-director-producer and probably key grip Tom Laughlin) appears and stops the potential horse massacre this time. “When policeman break the law, there is no law. Just a fight for survival.” Well put and pithy, Billy!

In the meantime, Mike finds out his daughter Barbara is pregnant (and that the father might even be a Chicano!) and beats her up and throws her out. She finds refuge in The Freedom School, which is run by Billy’s sort-of girl friend Jean.

At the Freedom School, you can “learn anything, get turned on by creating anything, come and go as you please and ask the question ‘what’s their trip’ a lot.” Oh, they may call it The Freedom School, but I smell a big fat hippie rat! (I may have said that already.)
The school also encourages 11-year olds to sing slightly off key songs about Vietnam War casualties, which may cause you to uncomfortably squirm in your seat a bit.

The school does have a no drug policy, but apparently has no restrictions on performing improv skits. And does the movie have to show every single skit? Though most involve future WKRP in Cincinnati DJ Howard Hessman, who is probably the best actor in the movie.

Billy Jack goes through a rattlesnake ritual where he gets bit by the snake and either becomes a blood brother or dies. (It’s not even half way through the movie, so guess which one happens.)

The most memorable scene for me involves a road trip by some of the members of the Hippie commune; I mean some of the members of the Freedom School into town. The mostly Indian (I use the term Indian in the native-American sense, I’m not writing about the Apu trilogy after all!) students go into an ice cream parlor and don’t get served because they aren’t white enough. Bad guy Bernard Posner and friend show up to dump flour on them to give them the appropriate hue. They also punch Indian student Edward in the stomach, which unfortunately for Edward is a common motif for this film. But after all this occurs, Billy Jack shows up. (Billy knows when to show up the Indian way according to Jean, which is basically involves him just knowing when to show up.)
I confess to liking Laughlin’s speech when he sees the humiliated students:
Bernard. (pause) I want you to know, that I try, (pause) that Jean and the kids at the school try to control my violent temper and be passive and be non-violent like they are. (pause) I try. (pause) I really try. Though when I see this girl of such a beautiful spirit so degraded and when I see this boy…sprawled out by this ape here and this little girl who we all call God’s little gift of sunshine (chokes up.) and I think of the number of years she’s going to have to carry in her memory the savagery of this (pause) idiotic moment of yours…I go beserk!
(Billy beats up Bernard and his friend and then some of Posner’s thugs rough up Billy, though not before Billy shows off some nifty slo-mo karate moves.)

Moving on. The oft-injured Martin falls off his horse. The cops come to the school to look for Barbara and are serenaded by a song I think called “There’s a rainbow, made of children.” (I’m smelling that hippie rat again!)

There’s a strange but somehow compelling scene at the city council, where the straights (the council) spar with the not straights (the school). The council eventually agree to visit the school and when they do, you may not be too surprised at this point, they participate in some improv skits with Howard Hessman!

Moving on. We learn that whites can’t touch other spirits. Edward gets punched in the stomach again and we see some more improv involving Sheriff Cole this time (and of course Howard Hessman!)

The turtleneck wearing Bernard tries to coerce a student into confessing Barbara’s whereabouts, but before he can assault/rape/kill her, Billy Jack and Jean show up. Billy makes Mr. Turtleneck drive his $6000 corvette into the lake.

Martin tells Barbara that he loves her but hasn’t tried to sleep with her because “she’s an anybodys” and his love for her is spirtual and wants to show her he’s not just interested in sex. Way to go Martin! And way not to have a scene where you don’t get beat up!

Next scene: Martin gets beat up.

Jean then takes a bath. Her mistake is in taking a bath outside alone in the middle of the woods, and lying nude on the ground to dry. Along comes Bernard and friend and, well, you figure out what happens next.

Jean says not to tell Billy about the rape to an older student who screeches back to her, “DAMN YOUR PACIFISM!” I’m not sure why, but I like to hear the word pacifism screamed at high decibels.

Moving on: Martin is finally put out of his misery once and for all with four headshots by the evil Bernard. Billy also finds out Bernard raped Jean. Billy finds Bernard, who shoots Billy in the stomach. But the unfazed half-breed still manages to kill the evil one with one chop.

Billy Jack is now on the run and Barbara runs away with him. Shots are fired at Billy, who returns fire and shoots Deputy Mike in the head. I might have expected a little more reaction from Barbara at this point like, “Billy, did you just shoot my daddy in the head?” But no, they just proceed to hole up in an abandoned church.

Barbara waxes poetic. “From the day I was born until every second in between, life has just been one shit brick.” Amen, Barbara.

Billy Jack tells the authorities the unreliability of the white man in keeping treaties, but finally gives himself up as long as the Freedom school will remain open to do more improv and more casinos will be placed on Indian land. THE END

Okay, it’s not Citizen Kane. But though I’ve poked a bit of fun at it, Billy Jack really does represent the time period of the early 70’s for me and of the American anti-hero of the period.

In fact, I’m now going to raise my fist in the air in support, which you are also welcome to interpret as giving the finger to Michael Medved.
Posted by 1001: A Film Odyssey is produced, directed and written by Chris, a librarian. at 9:23 PM