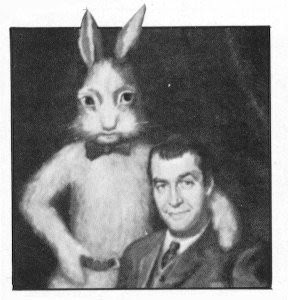 There are a couple of old-timer movie critics on Youtube called the Reel Geezers. Every once in a while I feel the need to make a geezer like observation myself, such as “Movies used to have greater special effects in the old days. It was called a viewer's imagination!”
Take that Transformers!

I remember as a kid watching Harvey, waiting for Elwood Dowd’s imaginary pooka/rabbit to appear. It did through the actions of the actors, though it wasn't necessary (or advisable) for there to be someone there in giant bunny suit.
Take that Howard the Duck!

The play by Mary Chase has had a lot of staying power and can still be seen on stage from time to time, even after 60 plus years. The story of a boyish man in his 40’s who decides “In this world you must be oh so smart or oh so pleasant." Well, for years I was smart. I recommend pleasant.” Well the Peter Pan syndrome certainly has a certian amount of appeal for me.

The film version is memorable, but does have flaws. Peggy Dow and Charles Drake are both pretty bland as the nurse and doctor that try to help Elwood and I’ve always found Jesse White one of the most annoying character actors in movies. Though this film does prove that Jesse (and many other character actors) seemed to be in his 60’s even when he was 30.

On the other hand, Josephine Hull is terrific as the exasperated Veta Louise and Jimmy Stewart gives one of his best performances as Elwood Dowd. He really shows off a gift for being understated, an ability that many in his place couldn’t pull off.

I just read that Robert Downey Jr. is going to be in Spielberg’s Harvey remake (Not Tom Hanks?) All I can say is, "Robert, you gotta make me see the Pooka. If you make me see the Pooka, the special effect will be greater than any in Iron Man!
Posted by 1001: A Film Odyssey is produced, directed and written by Chris, a librarian. at 7:32 PM