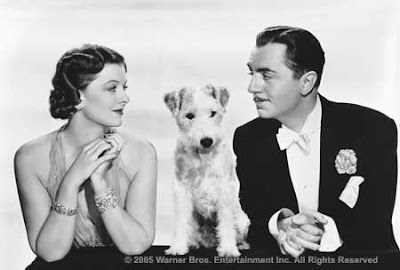 If this had been between Hammett’s The Maltese Falcon against John Huston’s film of the same name, I would have gone for the movie.

Book or Movie? In the case of The Thin Man, I’m going to give the nod to Hammett’s original source over the film. It’s not an easy choice. I don’t think there has ever been a screen couple as engaging as William Powell and Myrna Loy as Nick and Nora Charles and the banter between the two of them is the best part of their Thin Man movies.

But here are some sample quotes from Hammett’s The Thin Man:

“Tall-over six feet-and one of the thinnest men I’ve ever seen. He must be about fifty now and his hair was almost white when I knew him.Usually needs a haircut, ragged brindle mustache, bites his fingernails.” I pushed the dog away to reach for my drink. (Nick Charles)

“You got types?”
“Only you, darling-lanky brunettes with wicked jaws.” (Nora & Nick)

“A lot of fancier yarns come from people trying to tell the truth. It’s not easy once you’re out of the habit.” (Nick Charles)

“That’s why I don’t very often drink, or even smoke. I want to try cocaine, though
because that’s suppose to sharpen the brain, isn’t it?” (Gilbert Wynant)

“She keeps trying and you’ve got to be careful or you’ll find yourself believing her, not because she seems to be telling the truth, but simply because you’re tired of disbelieving her.” (Nick Charles)

I love the quote with the description of “a lanky brunette with wicked jaws,” though I can’t read it without picturing William Powell saying it to a smirking Myrna Loy. 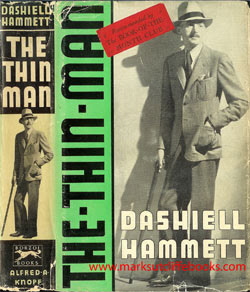 Posted by 1001: A Film Odyssey is produced, directed and written by Chris, a librarian. at 9:50 AM