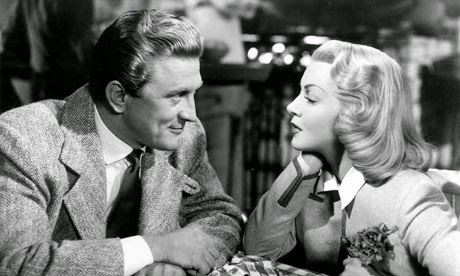 Before there was Altman's The Player, there was Vincent Minnelli's The Bad and the Beautiful. It's the story of ruthless movie producer Jonathan Shields (Kirk Douglas) who runs over many bodies to get to the top, including a starlet (Lana Turner), a director (Barry Sullivan) and a writer (Dick Powell). Even within the limits of what you could show in 1952 Hollywood, the movie digs up a lot of dirt and shows enough manipulation and bad behavior to be a strong Hollywood self-examination. Plus, Kirk is fun to watch and it's really his movie much more than it is the top-billed Turner.

Censorship alert! There is an important scene in the film where the audience needs to see the desperate starlet played by Lana Turner throw herself at Jonathan Shields. We have to establish in that scene that she is an alcoholic and a slut. And we see her do it! It's not coyly implied, it's clear what she is doing. I'm not sure how the censors let that one pass, even if it is an important plot point. There is also a scene when Shields is on the phone and asks the ladies man actor if he'd like to squire a southern belle. After the unheard response on the other end, Shields say, "No, I said SQUIRE." It's not too hard to guess what word the actor thought he said.

And the Elisha Cook Jr. supporting player award goes to..Barry Sullivan. The Bad and the Beautiful is generally regarded as Sullivan's best movie role, playing the director friend of Jonathan Shields who gets left out in the cold by him. Sullivan did occasionally have a staring role, such as the film noir The Gangster. In later years, I remember him as a doctor in Earthquake. But Sullivan really belongs in the character actor Hall of Fame for his many TV roles. And I mean many! From the 50's until the end of the 70's, Sullivan credits include virtually every TV show on the networks during that time. I guess whenever a role came along for a dignified, middle-aged doctor or lawyer role came along, I guess producers would shout out, "Let's get Barry Sullivan!" One of his last roles was in an episode of The Love Boat, the defacto retirement home for many Hollywood careers.

Posted by 1001: A Film Odyssey is produced, directed and written by Chris, a librarian. at 8:30 PM