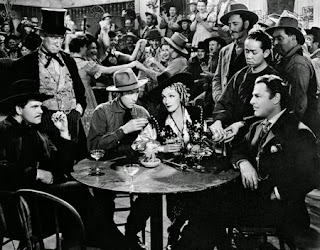 Destry Rides Again probably doesn't offer too many surprises for those who have seen a lot of Westerns, but that's okay. Few from this era were probably as well made as this one. We have the seemingly harmless new deputy (perfect casting for Jimmy Stewart) that we know is going to be quite the force when he needs to be. We also have the out of place but formidable German singer (Marlene Dietrich) who is sharp and tough but will eventually fall for Destry we are quite sure (as well as serve as the inspiration for the character Madeline Kahn would play in Blazing Saddles). The standard businessman villain (Brian Donlevy) is there too.

We also get a couple of fun supporting comic performances from Charles Winniger and Mischa Auer as the new sheriff and the Russian who keeps losing his pants, respectively.

...the Elisha Cook Jr. supporting player award goes to...Billy Gilbert. Rotund, explosive, big-eyed comic actor Billy Gilbert shows up about three times in this film, but he is always good for a laugh whenever he loses money in his bar or Mischa Auer tries to steal his pants. Billy also shows up briefly in the Duck Soup and has a very funny bit as a process server in His Girl Friday.

But I know him best from my days of watching Laurel and Hardy shorts, where he served as Stan and Ollie's comic foil in Pack Up Your Troubles and most famously in The Music Box. 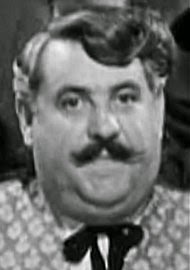 Posted by 1001: A Film Odyssey is produced, directed and written by Chris, a librarian. at 4:49 AM