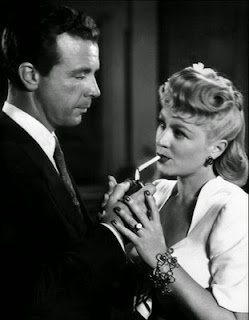 When I think of Raymond Chandler's detective Philip Marlowe, I naturally first think of Humphrey Bogart in The Big Sleep. One might also conjure up Elliot Gould's version in The Long Goodbye or Robert Mitchum in Farewell, My Lovely. But I never pictured Dick Powell as Marlowe, mainly because I know him mostly as the juvenile musical lead in Busby Berkley films such as Goldiggers of 1933. But all perceptions aside, he turns out to be a pretty good Marlowe in Murder, My Sweet. Tough and smart-mouthed, and a guy who likes his dames, booze and money. If you watched one of Powell's early musicals right before you saw Murder, My Sweet, you'd hardly think it was the same actor.

And the Elisha Cook Jr. supporting player award goes to..Otto Kruger. Otto's debonair looks and German heritage assured him of playing mostly villains in films in the 30's and 40's. He plays the suave but untrustworthy Jules Amthor here and does it all with a sophistication that is a nice contrast to his less refined associate Moose Malloy (Mike Mazurski).

Otto also played a heavy in Hitchcock's Saboteur and later played the sheriff in High Noon. I also found a clip of Otto in the 1933 film The Women in His Life, which has a scene with Otto (sophisticated as always) playing a game of pinball of all things! Otto later re-teamed with Dick Powell to appear in a couple of episodes of TV's Dick Powell Theater in the early 60's.

Posted by 1001: A Film Odyssey is produced, directed and written by Chris, a librarian. at 3:38 PM