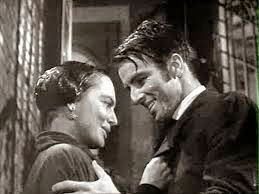 I can't say The Heiress was one of my favorite films from my Hollywood golden age list, but it is certainly a film with merit. And it is a fine role for Olivia De Havilland as the rich (or soon to be rich) woman who gets abused in different ways by both her father and her suitor (Montgomery Clift). As always, director William Wyler really sets the scene for his period pieces. In this case, it's the late 19th century. De Havilland's believable transformation from the shy spinster at the beginning of the film to the bitter woman we see at the closing credits clearly helped win her her second Oscar.

And the Elisha Cook Jr. supporting player award goes to...Sir Ralph Richardson. I think of Sir Ralph as a Shakespearean actor first and also as someone who played in a lot of BBC type endeavors. But his credits also include such diverse fare as Things to Come, Doctor Zhivago, O Lucky Man and Greystoke: The Legend of Tarzan, Lord of the Apes. He also gets points from me for playing "the librarian" in Rollerball.

The dignified and stuffy role of Dr. Sloper in The Heiress was well-suited for Mr. Richardson. His cruelty to his daughter is not by the hand, but with his words. Does he love his daughter or does he hate and resent her? That's open for interpretation. It is funny that he is actually correct about the motives of his daughter's suitor. 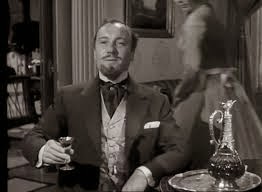 Posted by 1001: A Film Odyssey is produced, directed and written by Chris, a librarian. at 5:04 AM