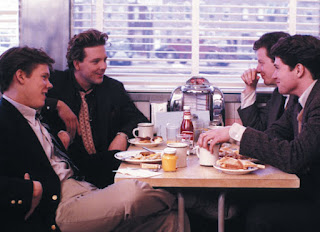 Bacon, Rourke, Daly and Stern enjoy lunch
...or is it breakfast? in Diner

Diner is Barry Levinson's autobiographical film about being a young adult in Baltimore in late 1959. The film features the guys in the film hanging out in the local diner (hence the title) and how they are dealing with various degrees of success facing adulthood, responsibility and even (gasp!) marriage. The film has always been a favorite of mine and is smartly written by Levinson and boasts distinctive and interesting characterizations. Reminiscent of American Graffiti a decade before it, Diner had a cast of unknowns that were to come to prominence in upcoming years: Mickey Rourke, Daniel Stern, Tim Daly, Kevin Bacon, Steve Guttenberg, Paul Reiser and Ellen Barkin. 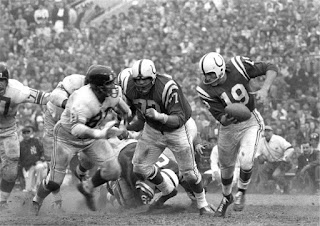 Johnny Unitas leads the 1959 Baltimore Colts
to another title

Are you ready for some football? Diner's Eddie (Guttenberg) is so obsessed with the Baltimore Colts, that he makes his fiancee pass a football quiz before he agrees to marry her. We see mostly his buddies as she is taking the test waiting to see if she makes the grade as if they are waiting for her to deliver a baby in one of the film's funniest scenes. The Colts were on their way to a second straight NFL championship in 1959, defeating the Giants in the title game 31-16. 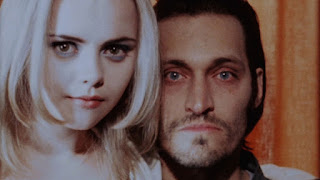 
Writer/Director/Star Vincent Gallo's indy film Buffalo '66 rates most highly on my personal "quirky film meter." Gallo plays Billy, who right after serving a lengthy prison sentence recruits a girl named Layla (Christina Ricci) he picks up to pose as his wife to mollify his parents (Ben Gazzara and Angelica Huston). Recruits might not be the right word as kidnaps may be a more appropriate term. Of course, she seems oddly willing to go along with the not particularly likable Billy's scheme. We then get to see Billy's strange family dynamic, learn why the innocent Billy went to jail, witness gambling addiction and its subsequent consequences, observe a most off-beat romance between the two leads and of course, get a heavy dose of football obsession. The off-beat supporting cast also includes: Jan-Michael Vincent, Rosanna Arquette and Mickey Rourke (of Diner). 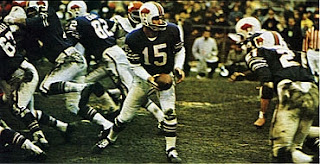 Are you ready for some football? The title of this film is based on Billy being born during the Buffalo Bills championship AFL season of 1966, causing his fanatical football fan mother to miss the championship game, which she reminds him of at every opportunity. In reality, the Bills actually won the title games in 1964 and 1965 and lost the '66 title game 31-7 to the Kansas City Chiefs, depriving them of an opportunity to play in the first Super Bowl. So it goes.
Posted by 1001: A Film Odyssey is produced, directed and written by Chris, a librarian. at 10:33 AM