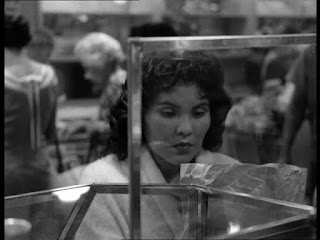 I knew next to nothing about The Exiles, a seventy-two minute film about Indians/Native Americans in late 1950's Los Angeles when I popped the Criterion disc into the DVD player. In fact, going into my viewing I thought it was a documentary!

What we do have in this drama is the Native American/Indian people in this very small neighborhood doing various normal things in a snapshot of one night. We have a lady (Yvonne) who does the mundane grocery shopping or going to see a movie and dreams of a better life. We see several characters going out for drinks, including the jerky guy (Tommy), the guy who just sort of observes (Homer) and doesn't really react to much other than to go with the flow, and a large group that goes to a secluded place for a "49 Party", a type of traditional Native-American dance, which they do on a hill overlooking Los Angeles. Interesting for the historical value and time, movie commentator Sean Alexie (Smoke Signals, Who jokingly called it Native American Graffiti) points out that it was the first time in any film where you get to see a group of Native Americans doing something as mundane as buying gas! The film uses voice over narration and may have the feel of a Cassavetes film of the period to some, which Alexie points out.

The cinematography of the movie is very nice for something so low budget (maybe because of it?) and the final shot of the movie (below) is memorable.

Side note: They caught up to Yvonne Williams years later and she said she had never seen The Exiles, her only screen appearance. 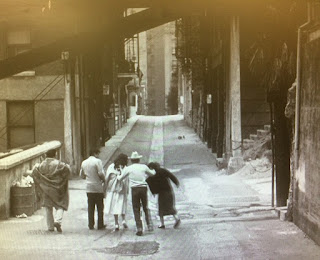 A fun night's end in the final shot of The Exiles 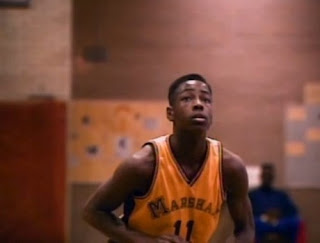 
Hoop Dreams I have seen before and was a well deserved Oscar winner for Best Documentary of 1994. We follow two black youths in Chicago city schools over their four high school years whose dreams revolve around getting a chance to play basketball and perhaps getting to a point where they can reach the pinnacle and turn pro like their hero, Isaiah Thomas. It's most interesting that director is able to follow these kids around during their entire high school career and see how they develop. We see William the strong star player, whose career has ups and downs mostly due to untimely injuries. We have the smaller Arthur Agee, who actually gets kicked out of one school due to grades, but eventually makes a mark in basketball at his next school. We see the highs and lows of their family life, friends, neighborhood, coaches and teammates. We also see quite a number of scenes with Academic Counselors! A long film, but well worth your time.

Side note: In Danny Peary's Alternate Oscar book, he rates Hoop Dreams as the Best Picture Winner for 1994. This year featured Pulp Fiction, Forrest Gump, The Shawshank Redemption and several other notable films, but Hoop Dreams was Peary's choice. 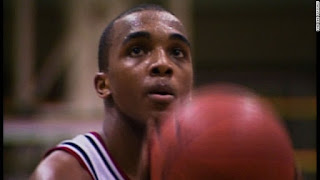 William Gates in Hoop Dreams
Posted by 1001: A Film Odyssey is produced, directed and written by Chris, a librarian. at 2:41 AM