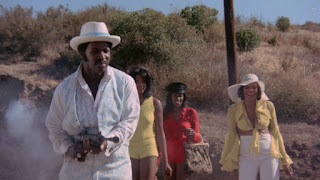 I was listening to a podcast recently featuring screenwriters Scott Alexander and Larry Karaszewski. They were talking about their newest film, Dolemite is My Name starring Eddie Murphy. It made me want to see it, but also realized I had never seen the original Dolemite movie before! How had I missed this classic?
So I knew I had to quickly get acquainted with the original.

Dolemite is both a masterpiece of camp and enjoyable in its on right. Dolemite (played by the one and only Rudy May Moore) gets released from jail and sort of goes undercover searching for bad guys and bad cops. He wears flashy clothes, makes out with a lot of sexy girls who can do Kung Fu and says Motherfucker! a lot! He also shares a lot of his slam/bam poetry with us and provides my favorite moments from the movie.
It's a fun ride and your 70's blaxploitation viewing resume isn't complete without it. 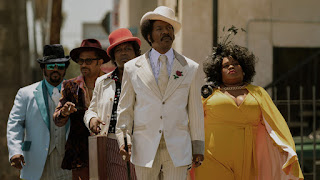 Eddie Murphy is ...Rudy May Moore...in
Dolemite is My Name!

This set me up to watch Dolemite is My Name! with Eddie Murphy playing Rudy May Moore. Rudy is an enthusiastic self promoter. He sings and does comedy in local clubs but never manages to make it big. He's into his forties at this point and that big break in show business is unlikely at this point...or is it? Murphy has a field day in this role as the never say die Rudy May. The screenplay gives us everything we could possibly want to know about the unlikely rise of  Mr. Dolemite. Some of the highlights of the film include Rudy's absorption of old stories from street people to create his Dolemite character and the making of the Dolemite film, which is produced on the cheap to say the least.

Alexander and Karaszewski also wrote the screenplay for Ed Wood, a story of another unlikely movie icon. Ed and Rudy May both had their loyal entourages, who we get to know well in Ed Wood and Dolemite is My Name!
Posted by 1001: A Film Odyssey is produced, directed and written by Chris, a librarian. at 2:15 AM