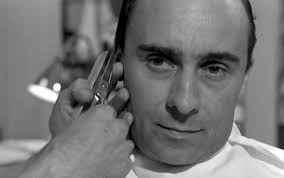 The Man Who Had His Hair Cut Short

Ah, the refreshing feel of a short haircut accentuated by a vibromassage device makes you feel nice and clean on the outside...even if you are having difficulty with what's going inside your head. At least that's how I interpret The Man Who Had His Hair Cut Short. Govert is a teacher who falls in love with a student. He misses his chance with her until years later...though not before witnessing an autopsy beforehand. He finally reunites with her...she loves him too! Or does she? He gets a gun and shoots her...she dies...or does she? He gets locked away and sees her on a newsreel. She isn't really dead. His mind can now focus on the family he neglected and left behind. I'm not really sure what is happening here, but that's okay. What is presented is compelling enough and definitely worthy of a repeated rinsing...I mean viewing. 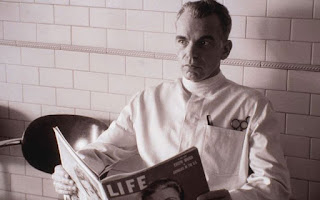 The Man Who Wasn't There


The patterns of a head of hair from the viewpoint of a barber. The patterns just seem to go on and on, don't they? This is the perspective of Ed Crane (Billy Bob Thornton), the barber who seems like an bit player in his own life. The Man Who Wasn't There is a modern day film noir filmed by The Coen Brothers in glorious black and white. Crane is in a loveless marriage, whose wife is having an affair with her boss. Crane knows about it and anonymously blackmails the boss to get money to invest in a get rich quick dry cleaning scheme. All does not go well. When I was thinking of a movie to team up with The Man Who Had His Hair Cut Short, this was the first one that came to mind. Only Crane doesn't just get a nice haircut like Govert, Crane has to give nice haircuts to others every day. It's the monotony of his life that leads to his desire for something more. Like Govert, things fall apart for Crane, who eventually finds himself murdering his boss, having his wife accused of the crime and eventually being charged with a different murder he didn't commit.

I'm glad I watched these two back to back. I wonder if I can get in for a trim at Supercuts tomorrow?

Eddie Murphy as Clarence, the know-it-all barber
in Coming to America 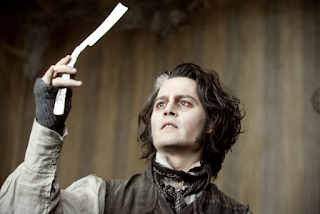 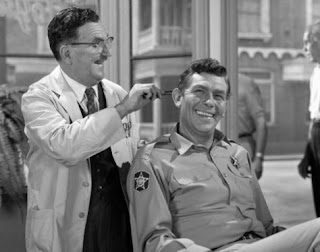 Howard McNear as Floyd the Barber
in The Andy Griffith Show 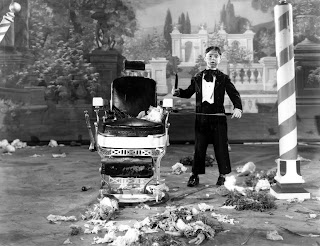 Alfalfa Switzer sings The Barber of Seville in
The Our Gang Follies of 1938
Posted by 1001: A Film Odyssey is produced, directed and written by Chris, a librarian. at 1:44 AM