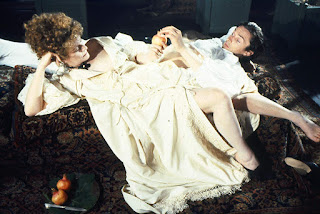 
It's kind of funny sometimes the order in which you watch films going through the 1001 list. I watched Peter Greenaway's The Draughtman's Contract pretty soon after I watched The Cool World (1963). The latter is an indy Urban drama set in Harlem and the former is about as haughty a period piece as you could get. Sometimes you just have to reset your mind to time in place...give me a sec...got it.

Set in 1694 England, the draughtsman of the title is named Mr. Neville and is hired to draw a series of draughts of a fancy country house and surroundings by a rich landowner named Mrs. Herbert. But what is going on on the estate? What mystery is ultimately revealed in the draughts?  Is Mr. Neville just a seducer of hearts and bodies or is something more going on? And who killed the man of the house? Is Mr. Neville going to ultimately be a victim? I can like films like this, with a harpsichord seemingly always playing in the background, elaborate costumes and gigantic wigs on both sexes, though I've really got to be in the mood for it. I admire the cleverness of The Draughtman's Contract, though I can't say I have a great desire to see it again. 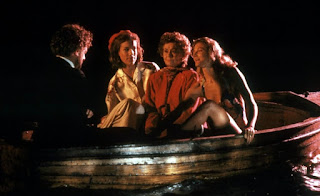 
Greenaway also directed Drowning By Numbers, a smart, dark comedy featuring three generations of women whose men come to an untimely underwater end. The ladies are all named Cissie and their crimes are covered up by a coroner infatuated by all of them. Make sure you look for the numbers 1-100 popping up throughout the movie. You may find this device tiresome after awhile, though I rather liked it. I also liked the film overall, as well as the three leading ladies (Joan Plowright, Juliet Stevenson and Joely Richardson). I also liked (and sort of identified) with the coroner played by Bernard Hill.
Posted by 1001: A Film Odyssey is produced, directed and written by Chris, a librarian. at 6:28 AM