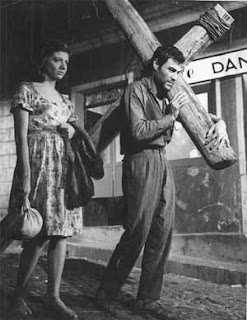 A devout peasant named Ze makes a promise to Saint Barbara that he will drag a wooden cross to the altar of the church in a nearby town if his beloved donkey is saved. His donkey recovers and his trek with the cross to the church is where Keeper of Promises begins.

Along the road to the church (with his cross flung over his shoulder and accompanied by his reluctant wife) he is mocked by onlookers, but finally reaches his destination. However, the church is closed when he gets there and patiently waits for it to open. He can take the cross in and be done, right? Wrong! The priest of the church thinks the man's promise the work of devils and refuses to let him bring it in. Ze is determined and waits it out. It becomes a newsworthy event and the press slant gives Ze's quest a much more political tone than the reality of the situation dictates. Of course, at one point Ze says something to the effect, "I'm not a rebel, but I'm becoming one!" Meanwhile, his wife becomes involved with a local pimp.The Monsignor of the church tries to persuade the priest to reconsider his position as he is worried about the political fallout. The people of the town begin to side with the man and want him to be allowed to bring his cross inside. Everyone has an agenda, it seems.

I really like this little film. You get to see in stark terms how differently people interrupt the same event to coincide to their own viewpoint, yet the presentation never feels heavy handed. The press aspect of the film reminds me a bit of Billy Wilder's Ace in the Hole.

I'd like to thank TSorensen for his assistance in getting a copy of this film for me with English subtitles.
http://tsorensen1001.blogspot.com/ 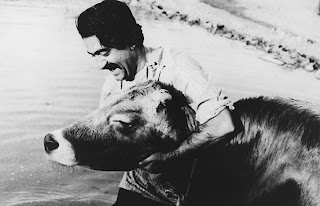 Another simple villager named Hasan (this time from Iran) also has an attachment to an animal...his cow. He treats the cow like one would treat a beloved Cocker Spaniel. When he has to leave the village for a couple of days, the cow turns up dead. The close-knit people of the village are afraid what Hasan's reaction is going to be and decide to bury the cow and tell Hasan that the cow has run away. After he returns, Hasan does not believe for a second his cow would ever leave him this way. He suspects some local thieves may be behind this. As time goes on, Hasan has a breakdown and goes out to his barn and takes on the character traits of the cow. The villagers and Hasan's wife do what they can to try to help him, but he is too far gone and eventually comes to a sad end.

Despite the sad resolution, there are positives to be seen in The Cow. One is the coming together of a village to help one of their own. Was burying the cow and lying to Hasan the best choice? Maybe, maybe not. It doesn't seem like the result would have been much different for Hasan had they just told him the truth to begin with.

I also liked this film very much. Maybe I have a thing for small village morality tales?

Now if you'll excuse me, my pet yak needs feeding.
Posted by 1001: A Film Odyssey is produced, directed and written by Chris, a librarian. at 5:00 AM