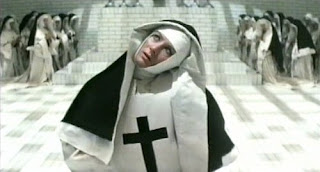 "The Devils is a see-through movie composed of a lot of clanking, silly, melodramatic effects that, like rib-tickling, exhaust you without providing particular pleasure, to say nothing of enlightenment."-Vincent Canby, The New York Times, July 17, 1971

"The Devils is an incredibly ambitious film, conceived not merely as a historical document by as a visionary work, a prophetic warning of the tenacity of ignorance and superstition."-Stpehn Farber, The New York Times, August 15, 1971

"Ken Russell's The Devils arrived in Venice tonight and encountered semi-censorship. It was show for the press and for an invited audience, but its public showing was canceled to avoid possible police intervention."-Thomas Quinn Curtiss, The New York Times, August 29, 1971

The three 1971 reviews of The Devils from the New York Times well illustrates three ways you can look at The Devils, Ken Russell's drama about a priest who runs a city in 17th century but continues to be thwarted by the governmental, religious and sexual politics of others. You can look at it as an over-the-top mess, which it is at times, depicting religious orgies and elaborated scenes of torture. You can look at is as a canny indictment of politics and religion and how an honest man is likely to become a victim of the treachery of others. You can also see why others might have objected to the content of the film, for the way it depicts sexuality and religion. I hadn't seen this film in thirty years and seeing it again, I can understand all points of view. It was at times way over the top to the point of wretched excess...yet, it had a valid story to tell that stays with me. Judge for yourself.

The film is based of Aldous Huxley's book, The Devils of Loudon. 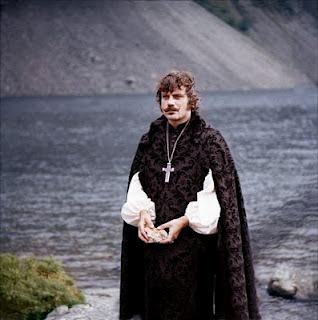 Oliver Reed as the good priest
in The Devils 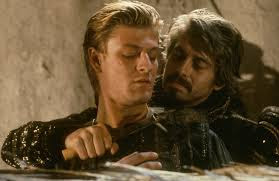 "Art becomes life becomes art as (Derek) Jarman breathes biological life into Caravaggio's greatest paintings while the artist reflects without any mercy on his own life split between the braying snobbery of the art world, and the exciting danger of a universe where violence and sex intersect."-Colin MacCabe, 1001 Movies You Must See Before You Die

Caravggio is a pleasure to look at and its disjointedness is a way of seizing what Mr. Jarman apparently concieves to be the wild leaps of faith of Caravaggio's imagination."-Walter Goodman, The New York Times, August 29, 1986

The impressive set designer of The Devils was Derek Jarman, who soon began to make controversial movies of his own from the director's chair. Caravaggio is Jarman's film about aspects of the life of the famed painter (played by Nigel Terry) and it is a much less elaborate affair than The Devils. The story begins with Caravaggio on his death bed looking back on his life as a young street hustler through his time as a favored artist of the Catholic Church. He also has intrigues with a local ruffian named Ranuccio (Sean Bean) and his girlfriend Lena (Tilda Swinton).

You can take the facts presented in Jarman's film with a grain of salt. I'd recommend comparing them with the episode on Caravaggio of Simon Schama's BBC series The Power of Art. 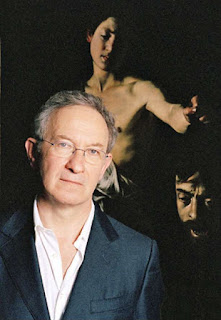 Silmon Schama's
The Power of Art
Posted by 1001: A Film Odyssey is produced, directed and written by Chris, a librarian. at 7:59 PM