“There are two lives, the natural and the spiritual, and we must lose the one before we can participate in the other.”
― William James, The Varieties of Religious Experience 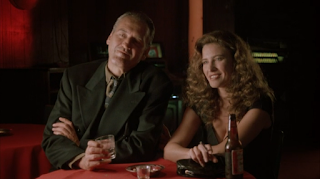 
A hedonistic young woman named Sharon (Mimi Rogers) explores the decadent nightlife of swinging with her friend Vic (Patrick Bauchau). However, something important is brewing in the world! People are having dreams about the pearl! The rapture and the whole four horseman of the apocalypse are coming! Repent, sinner!

Sharon eventually finds Jesus, marries David Duchovny and has a daughter. A few years later, her husband is murdered. After that, she gets visions from God to go into the desert with her daughter. When God doesn't come, she kills her daughter so her offspring will ascend to heaven. She is grief stricken with what she has done, but guess what? The rapture really is coming! The horsemen are here and God only wants you to accept him and your ticket to heaven is stamped. But guess what? Sharon won't forgive God for what he pushed her to do to her daughter and the film finishes with her stuck in limbo "forever."

I can understand why The Rapture may have limited appeal. Christian viewers may be prone to reject it because Sharon ultimately rejects God. Secular viewers may find a literal Four Horseman of the Apocalypse coming as trite. I think the movie has balls in that it doesn't try to conform to anyone's expectations.

This is the third time I've seen this movie and it seems to come on my radar every ten years. I'll probably keep watching it about every ten years until I get raptured myself. 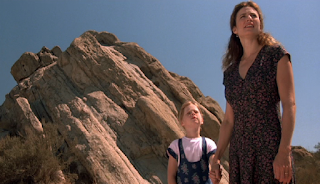 Sharon searches for God in the desert
in The Rapture

I have no basis whatever for my belief in God other than a passionate longing that God exist and that I and others will not cease to exist. Because I believe with my heart that God upholds all things, it follows that I believe that my leap of faith, in a way beyond my comprehension, is God outside of me asking and wanting me to believe, and God within me responding.
-Martin Gardner, Whys of A Philosophical Scrivener 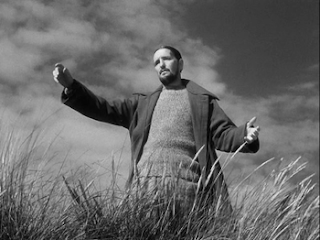 Johannes, the mad brother
in Ordet


Quote from the novel “Invisible” by Paul Auster.
If not for the end, Ordet would not have effected you any more than any other good film you’ve seen over the years. It is the end that counts, for in the end does something to you that is totally unexpected. And it crashes into you with all the force of an ax felling an oak.

Will my reaction to viewing this film be like Adam Walker (Auster’s character) or like those in the audience who laugh at the unlikely resurrection?

I've been doing this blog so long now, this is actually the second time I've seen Ordet, the first time being ten years ago now! I still can't figure out exactly why I like Ordet as much as I do. I can certainly understand how someone could find it quite sappy...yet somehow I don't find it that way. And I really love the mad brother (Johannes). His monotone will stay with me in dreams for some time to come.

I thought Ordet would go well with The Rapture. God is alive in both films. In The Rapture, Sharon rejects God anyway because he led her to take away the life of her daughter. In Ordet, the husband embraces God because of the restoring of life to his wife...The varieties of religious experience indeed...Amen. 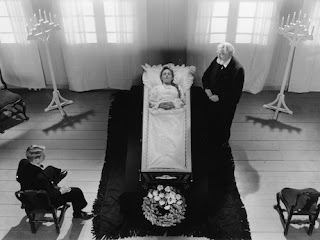 Death and resurrection
in Ordet

We must judge the tree by its fruit. The best fruits of the religious experience are the best things history has to offer. The highest flights of charity, devotion, trust, patience, and bravery to which the wings of human nature have spread themselves, have all been flown for religious ideals.”
― William James, The Varieties of Religious Experience
Posted by 1001: A Film Odyssey is produced, directed and written by Chris, a librarian. at 7:56 PM