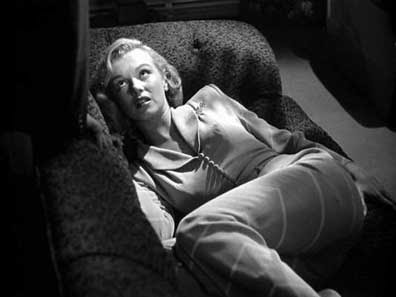 Expectations: I really don’t have any. I just know it was a John Huston film and isn’t to be confused with Richard Brook’s The Blackboard Jungle.

After viewing: I’m really surprised I hadn’t seen this before and knew so little about it. It’s a terrific heist movie and a very worthy follow-up for Huston to Treasure of the Sierra Madre.

Fact only I may find interesting: Co-star Louis Calhern starred in both The Asphalt Jungle and The Blackboard Jungle.

Marilyn sighting: One of Marilyn Monroe’s early roles. She is most fetching playing Calhern’s mistress. “Some sweet kid.”

And the Elisha Cook Jr. supporting player award goes to…Sam Jaffe. Despite a strong supporting cast including James Whitmore, Jean Hagen and John McIntyre, I have to once again give the prestigious Cook award to Mr. Jaffe. This time he isn’t playing a bhisti bugle boy as in Gunga Din or a scientist as he did in The Day the Earth Stood Still, but a brilliant, logical, calculating criminal with one fatal flaw: a penchant for young women. (Apparently very, very, young)
Posted by 1001: A Film Odyssey is produced, directed and written by Chris, a librarian. at 11:27 AM