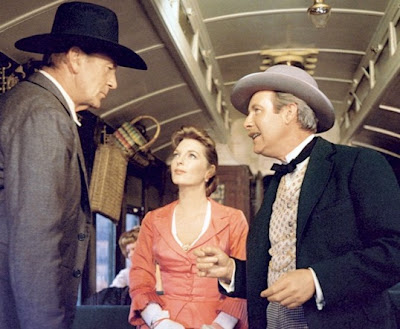 Expectations: I honestly hadn’t even heard of this one before I saw the listing in the 1001 Movie book.

After viewing: I think I appreciate the American Western more than I used to. Man of the West seems a little above standard Western fare of an ex-killer who has gone straight only through circumstances has to hook up with his old gang and mentor. It is enhanced by star Gary Cooper, playing the hero in one of his last roles.

Director Anthony Mann did a lot of Westerns and there’s a few more of his to go through in the book.

And the Elisha Cook Jr. supporting player award goes to…Arthur O’Connell. I grew up seeing Arthur O’Connell as the slightly annoying Mr. Goodwin from Crest commercials from the 70’s. Making sure that everyone that came in his general store purchased Crest seemed to be Goodwin's main reason for living.

But in previous years, Mr. O’Connell did make some memorable supporting film appearances in film such as Anatomy of a Murder. In Man of the West, he plays the comic relief, a big talker who acts rather cowardly when faced with problems-only to redeem himself before the end of the movie. So here’s to you, Mr. Goodwin!
Posted by 1001: A Film Odyssey is produced, directed and written by Chris, a librarian. at 2:00 PM