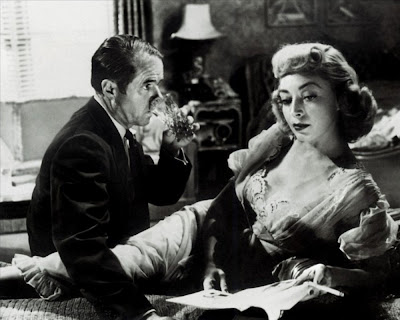 Expectations: Classic film noir. First of the great Stanley Kurbrick films. A favorite. And why is this not in the 1001 book again?

After viewing: The great heist in the film told by different viewpoints (which is the reason Kubrick chose this source material) and is what really sets this apart. The cast of character actors is quite good, the ending (different from Lionel White’s book) is a doozy and everything really comes together here. One question: What is the deal with Maurice,the Russian chess player/wrestler who you can barely undersand any of his dialogue?

In The Killing, Cook becomes part of the elaborate plan to rob the racetrack. It’s the one chance he has to impress his blonde wife, who knows that she is out of his league. Of course, she’s two-timing him, doesn’t really love him and you could almost feel sorry for the guy if he weren’t so naïve. Small of stature and rather plain looking, Described by critic Leonard Maltin as “the ultimate nebbish,” Mr. Cook had a long career that ran from The Maltese Falcon to The Big Sleep to Shane to The Killing to Rosemary’s Baby to later as Ice Pick on the television show Magnum P. I.

Always a second banana and usually a good bet to not survive to the film’s closing credits, Cook proves that you can have a long career in Hollywood by getting bumped off a lot.
Posted by 1001: A Film Odyssey is produced, directed and written by Chris, a librarian. at 2:04 PM