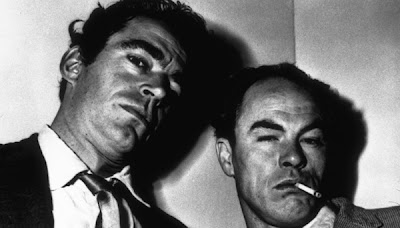 Expectations: The only 1001 listing for a film based on a Mickey Spillane story. I’m game.

After Viewing: Apparently screenwriter A. I. Bezzerides and Director Robert Aldrich threw out much of Spillane’s book to make this most interesting noir. In fact, the resolution has absolutely nothing to do with Spillane’s original story! Sorry, Mickey. But if you like film noir, it's one to see.

Jack Lambert (who I last saw in The Killers, playing the same type of role) has one of the most menacing glares in film and an even more menacing voice. He looks a little like John Malcovick here, though he acts more like Joe Pesci.

Jack Elam (who I last saw as one of the doomed gunslingers in the first scene of Once Upon a Time in the West) has a face you aren’t likely to forget once you see it. Elam’s bug eyed appearance kept him working as a Hollywood character actor for decades.
Posted by 1001: A Film Odyssey is produced, directed and written by Chris, a librarian. at 1:58 PM