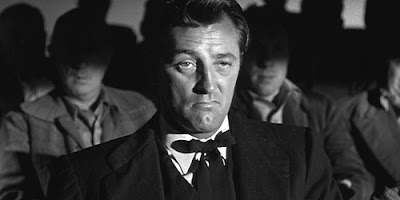 I’ve already seen a number of the classic Hollywood movies of the 1950’s. At least I thought I had. But going over some of the titles in 1001 Movies You Must See Before You Die, I noticed more than a few omissions from my movie viewing resume. For the rest of this month, I’m going to try to fill in some of those gaps as well as re-watch some old favorites. I’ll list my expectations for each film going in and state whether these expectations are reached or not. And I’ll give each film my Elisha Cook Jr. supporting player award strictly for the reason that I think it would be fun to do so. I’ve also done this already for 30’s and 40’s films so I see no reason to stop now.

Expectations: A very dark movie that I saw years ago. Charles Laughton’ only directorial effort and a very menacing part for Robert Mitchum.

After viewing: Was lucky that I got the opportunity to see this on the big screen this time out. Leading man Robert Mitchum as the preacher plays a character with absolutely no redeeming characteristics. I can see why this was not a great success-it was too different. Many who see this ask the question why Charles Laughton didn’t direct more movies? Robert Mitchum said the answer was because he died. Oh, well.

This grim, dark tale of evil and redemption would certainly make my list.

And the Elisha Cook Jr. supporting player award goes to…Lillian Gish. One of the first leading ladies of cinema is the closest thing this movie has to hero (at least an adult one). She gets the award for me just for her singing the second verse to “Lean on Jesus.” which offsets the preacher’s constant rendering of the first verse.
Posted by 1001: A Film Odyssey is produced, directed and written by Chris, a librarian. at 1:56 AM