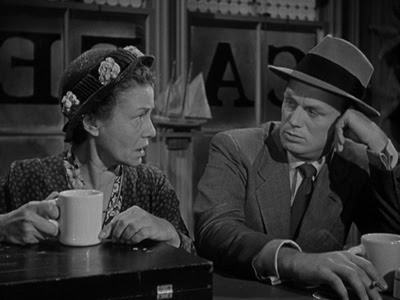 Expectations: Haven’t seen before, though a Samuel Fuller film noir sounds good to me.

After viewing: A B-girl? A pickpocket? A stool pigeon? These characters may be under the law, but even they wouldn’t sell out to a good for nothing Commie rat! I wasn’t expecting the Cold War subplot it ties in rather nicely to this film noirs plot line and the whole film is nicely done.

And the Elisha Cook Jr. supporting player award goes to…Thelma Ritter. One of the great character actresses of the 40’s and 50’s, she steals every scene she’s in as the stoolie with a heart of gold.
Posted by 1001: A Film Odyssey is produced, directed and written by Chris, a librarian. at 1:57 PM