WITNESS FOR THE PROSECUTION (1957) 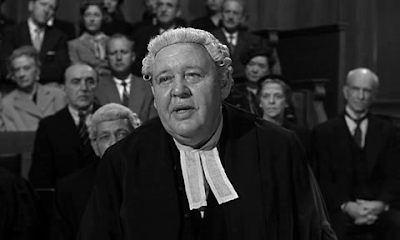 Witness for the Prosecution (1957)

Expectations: Not in the 1001 book, but the combination of director Billy Wilder, writer Agatha Christie and stars Marlene Dietrich, Tyrone Power and Charles Laughton make this something that should be seen.

After viewing: I confess that the main reason I picked this movie is because I recently played a supporting part in a local theatrical production of it.* It’s most interesting to see the workings of the British legal system, though I do find the ending a bit much.

And the Elisha Cook Jr. supporting player award goes to…Charles Laughton. Now why would I give the supporting award to the actor who I consider the main player in the film and has the most important part? Well, he’s billed behind Tyrone Power and Marlene Dietrich and doesn’t even have his picture on the DVD release of the film! Laughton completely dominates the film and is the best reason to see it. So because of billing, I give him this award, though his wife Elsa Lanchester is pretty funny here, too.

*Support community theater and God Save the Queen!
Posted by 1001: A Film Odyssey is produced, directed and written by Chris, a librarian. at 2:01 PM