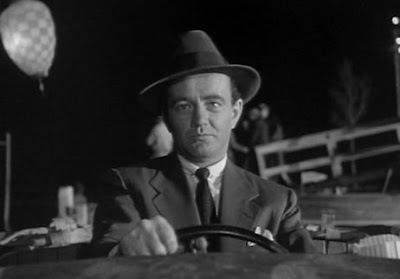 “The train tore along with an angry, irregular rhythm. It was having to stop at smaller and more frequent stations, where it would wait impatiently for a moment, then attack the prairie again. But progress was imperceptible. The prairie only undulated, like a vast pink, tan blanket being casually shaken. The faster the train went, the more buoyant and taunting the undulations.”
from Strangers on a Train by Patricia Highsmith.

Expectations: Another Hitchcock favorite, though now that I’ve read the original book, I may look at it differently

After viewing: You know, reading the book actually did detract from my enjoyment of the film. Some of the psychological (exemplified in the quote below) struggles of main character, Guy Haines, is really missing from the film, though the character of Bruno (Robert Walker) is dead on as portrayed in the movie. But how did Haines go from being an architect to a tennis player? And why did they change Bruno’s name? And there isn’t any carousel in the book!

This is why it isn’t always a good idea to read a book before watching an old favorite.

And the Elisha Cook Jr. supporting player award goes to…Robert Walker. Now I could give this to Hitchcock regular Leo G. Caroll as a Senator or Hitchcock daughter Patricia Hitchcock as the comic relief, as you can make an argument that Walker’s Bruno isn’t really a supporting character. But no matter how you slice it, Walker dominates this film as the sociopath Bruno.

“I believe any man can be broken down. I could break you down. Given the same circumstances, I could break you down and make you kill someone! It might take different methods than the ones Bruno used on me, but it could be done. What else do you think keeps the Totalitarian states going? Or do you ever stop to wonder about things like that, Owen?"
from Strangers on a Train by Patricia Highsmith.
Posted by 1001: A Film Odyssey is produced, directed and written by Chris, a librarian. at 1:59 PM