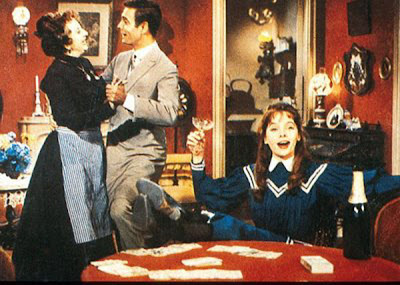 Expectations: I think I’ve done enough film noirs this month, so I figured this colorful musical is probably about as far away from film noir as a movie can get.

After viewing: Obviously this movie gets compared to My Fair Lady because they are both Lerner and Lowe and both are Best Picture Winners. I don’t like it as much as My Fair Lady, but it does have some winning musical numbers. And also if I’m doing this list, I might as well check off all the Oscar Winners I go through as well. I just hope this doesn’t mean I have to watch Broadway Melody of 1929 and Cimarron.


And the Elisha Cook Jr. supporting player award goes to…Maurice Chevalier. Yes, I must be getting older because I’ve come to actually like the old Frenchman. It’s hard to imagine this movie without his musical numbers, “Thank Heaven For Little Girls,” and “We Met at 9.”
Posted by 1001: A Film Odyssey is produced, directed and written by Chris, a librarian. at 2:03 PM