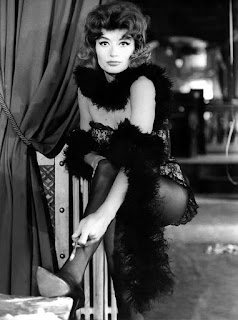 
When I first looked at the 1001 list there were a lot of films I noticed that I wasn't familiar with.  There seemed to be several sound-alike movies with names of women: Lola, Lou Lou, Run Lola Run, Lola Montes, Lucia, Laura, and Lolita. I was at least familiar with the last two.

Anyway, I'm about finished with all these films now, but I do have two more.
First up is Lola. Lola is directed by Jacques Demy and stars Anouk Aimee as Lola, a French exotic dancer who everyone seems to fall in love with. Among those smitten are an old friend, a sailor and Lola's long lost love that she has been pining away for for years and actually does come back to her (and her daughter) at the end of the film! Lola is elegantly shot with wonderful black and white cinematography. I like the 60's Paris setting as well...I can't say it really blew me away, but my tendency toward many of the French films of this era is that I like them...I just don't love them. Maybe through repeated viewings I can convert to the La Nouvelle Vague club someday.

Next we have Loulou from 1980. Isabelle Huppert plays Loulou in this...Wait, this just in...Huppert does not play Loulou. Loulou is played by...Gerard Depardieu? Well, that blows my whole names of women in the title theme! As if isn't bad enough that the young, angelic Huppert (her character is called Nelly) is involved in scenes in the bedroom with the big, oafish Depardieu in the first place! There is some good drama here with Nelly's attraction to the clearly below her class and intellect Loulou serving as a catalyst for much conflict. Nelly doesn't want to stay with her husband (who isn't Loulou), but she learns she's pregnant with Loulou's child and then she meets his shotgun loving French hillbilly "family" and we know this whole situation isn't going to end happily ever after for the two of them.. So it goes. 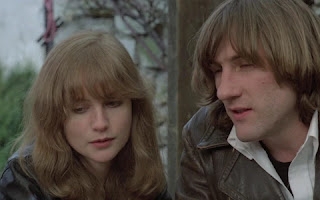 Lou Lou
Posted by 1001: A Film Odyssey is produced, directed and written by Chris, a librarian. at 2:00 AM