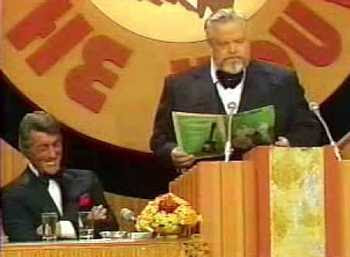 I first became aware of Orson Welles as the ominous person that introduced Jonathan Winters at the start of the comedy program The Wacky World of Jonathan Winters in the early 70's. Welles would speak directly to the camera in ominous tones about how this show was unscripted and improvised and something that television didn't normally do. This felt like the voice of God speaking! Winters could have done anything at that point and I would have been impressed!

I later saw Welles as the heavy-set, caped guy with the grayish beard in his many appearances on the Merv Griffin Show (often doing magic), The Tonight Show, Dean Martin Celebrity Roasts and Paul Masson Wine commercials ("We will sell no wine...before it's time."). He also was quite entertaining as an amateur magician and with his soaring voice that accompanied his pulling a rabbit out of a hat was something I found pretty impressive. 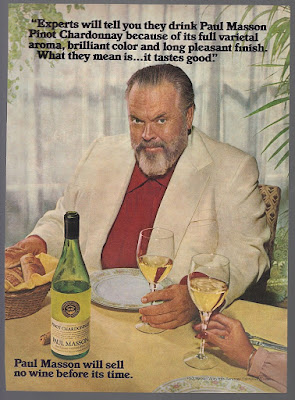 Welles sells wine...but not before it's time

I didn't then realize back then that his reputation and influence had really taken a hit from the days when he had made classics films such as The Magnificent Ambersons, Touch of Evil and of course Citizen Kane, which cemented his reputation as the great auteur in the long run, but in the short term made it hard for him to finance projects with the studios. 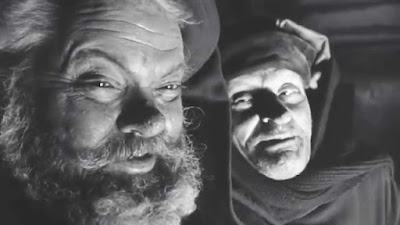 Orson Welles in Chimes at Midnight

It's a little funny that I grew up hearing about Orson Welles as basically a one-hit wonder and becoming pretty marginalized as a film-maker after Citizen Kane was released. But what about Touch of Evil? The Magnificent Ambersons? The Lady from Shanghai? Or Chimes at Midnight? It seems like only recently has Chimes of Midnight gotten the appreciation it deserves thanks in part to a wonderful restoration and distribution from the Criterion Collection. The film is a brilliant hybrid presentation of several of Shakespeare's plays with Falstaff  (played by Welles)  that the director somehow manages to meld into a cohesive whole. The photography, acting (John Gielgud as the King is a standout), and characterizations put this near the top of must see Shakespeare adaptations. The muddy, ugly battle scene is one of the best ever filmed. And the relationship between Prince Hal and Falstaff supplies the important and ultimately tragic center of this classic film. Jaunty score by Angelo Francesco Lavagnino. 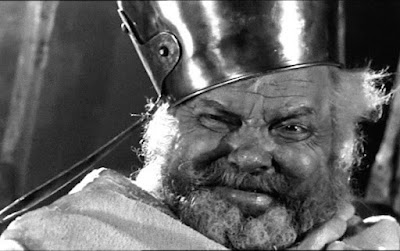 Welles as Falstaff wearing his "crown" 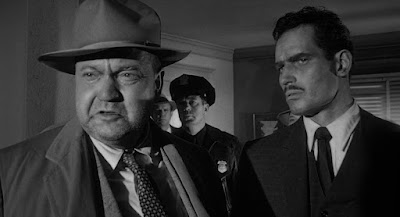 Orson Welles and Charlton Heston
in Touch of Evil
A Touch of Evil is Orson Welles's later film noir set on the U. S. Mexico boarder. There may be some plot points of this film that are a little sketchy, but the overall impact of the film is so strong and involving, I didn't care. And the long shot opening scene is classic. 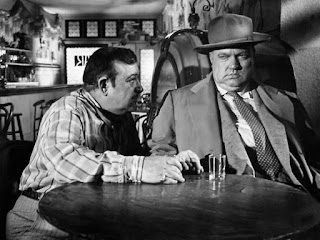 Akim Tamiroff and Welles
in A Touch of Evil 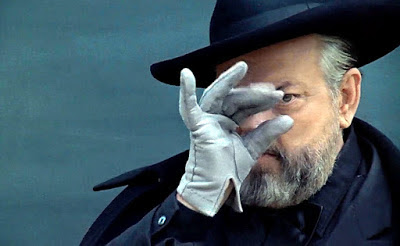 Most of the story revolves around a famed Hungarian painter named Elmyr de Hory, whose fraudulent imitation of masterpieces are probably still hanging in Art Museums posing as the real thing. de Hory's biographer is Clifford Irving, who turns out is a fake, too.! Irving's fakery involved his biography of Howard Hughes from the early 70's, though it turned out later that Clifford never actually met Mr. Hughes. And in F for Fake, the fake was writing about another fake! And to top it off, there is Welles, who becomes part of the story with his own biography and ads a bit of fakery at the end of the film involving himself and the stunning Oja Kodar.

The movie is all over the place, but that's not necessarily a bad thing. Peter Bogdanavich says in an interview that if you are on the same wavelength as F for Fake it is stunning. If you aren't, you probably won't care for it too much. I'm of the former and I'm glad the 1001 book added this one in the latest edition or it's pretty unlikely I'd have ever watched it. 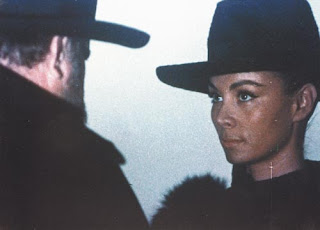 Welles eyes Oja Kodar
in F for Fake
Posted by 1001: A Film Odyssey is produced, directed and written by Chris, a librarian. at 6:00 AM