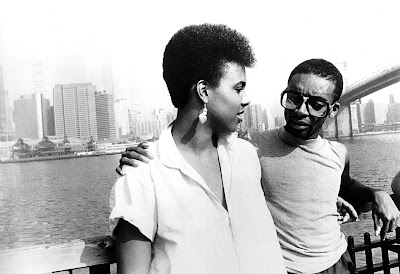 Tracy Camilla Johns and Spike Lee
in She's Gotta Have It

She's Gotta Have It, the original Spike Lee joint (he calls his films joints, so I'll just go with that) first came out in 1986. It is the low-budget black and white (as in not in color) story about a young black lady living in Brooklyn sharing her affections with three suitors: an arrogant athlete, a regular guy and the loudmouth Mars Blackmon (played by Lee). It's funny and observant and it's interesting seeing this for the first time so many years after the original release. But everything old is new again as there is now a She's Gotta Have It Netfilx TV series as of 2017!

Of course, it led to Spike making many more movies, generally more serious in nature than She's Gotta Have It (Though even that one does touch on serious issues). I was surprised he had never been nominated for a Best Director Academy Award before this year (Not even for Malcolm X?), though his screenplay for Do the Right Thing was nominated in 1990. 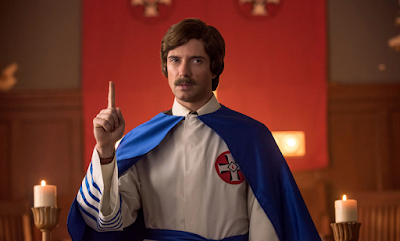 America would never elect someone like David Duke president!-Blackkklansman

Spike finally got some Academy director love this year for Blackkklansman, the true story of a black undercover cop and a Jewish cop (Adam Driver and John David Washington) who combine forces to infiltrate a Colorado chapter of the Ku Klux Klan. It hits the right notes for 1973 (afros, Richard Nixon, Stokely Carmichael) but brings it back to the relevancy of racism in present times as shown by the cuts at the end of the movie to real life news footage from the last couple of years. There are definitely many touches of comedy here as well, but the overall stakes are deadly serious.

And who doesn't like to see David Duke made a fool of? 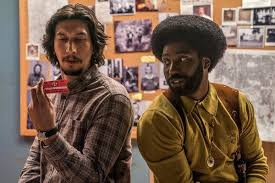 Adam Driver and John David Washington
check out their Klan membership
card in Blackkklansman.
Posted by 1001: A Film Odyssey is produced, directed and written by Chris, a librarian. at 8:00 AM