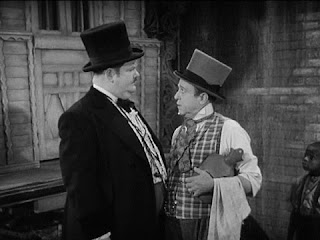 Set in 1870 Mississippi, this Hal Roach comedy features Oliver Hardy as a good-hearted doctor named Tibbett who is dealing with the prospect of his daughter's marriage to someone higher on the societal chain. He is also constantly thwarted by a snake oil salesman with an ailing pet elephant named Zenobia.

For comedy history, this is unique in that it was an Oliver Hardy role without his partner Stan Laurel, who was having a contract dispute at the time with the Roach studios. So in Laurel's place (but not exactly in his place) is Harry Langdon, who most associate with silent comedies. Their interactions are mildly amusing, but certainly not on the level of he best Laurel and Hardy.

Other cast members include: Billie Burke as Hardy's ditzy wife. Burke is know more for another 1939 film, The Wizard of Oz.

Hattie McDaniel as Doctor Tiibbett's maid and cook. McDaniel is know more for another 1939 film, Gone With the Wind.

And of course Stepin Fetchit...more on him in minute

But first a comment on how Zenobia deals with race.
In many ways the Roach studio was ahead of it's time as far as hiring blacks in roles they couldn't get anywhere else. Just look at Our Gang's inclusion of Farina, Buckwheat, Stymie as the black member of the gang throughout the 30's. Even in Zenobia, the young black boy Zeke memorizes sections of the Declaration of Independence and recites them back to impress everyone. On the other hand...there is a scene where Zeke asks Dr. Tibbett why he can't go to white parties. Dr. Tibbett explains he can't go to white parties, but "On the other hand, I can't go to colored parties!" The doctor also mentions that he has black pills and white pills in his doctor bag and that they are both very fine pills. I'm not sure if this attitude is enlightened in it's statement of equality or condescending in it's acceptance of a separate but equal mentality. Dr. Tibbett's daughter's song about the how you can hear the darkies singing under the trees doesn't help matters.

Back to Stepin Fetchit...
Lincoln Perry's (Fetchit's real name) popular character during the 30's of the world's laziest man led him to be noted by many to be the first black movie star. However, the role he played was looked back on in later years as a example of the shuffling, lazy, dumb stereotype that many wanted to forget. When some of Perry's films were shown on television, many of the scenes he was in were edited out. 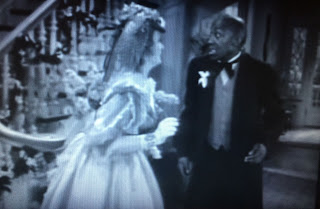 Perry plays Zero in Zenobia and whether you love him or find him cringeworthy you can't take you eyes off him in any scene he's in. Throughout the film, Perry can't seem to get anything anyone tells him quite right. He's goes to fetch Dr. Tibbett to tell him about the daughter's engagement but when he gets to him he can't remember what he was wanting to tell him, but knew it was something important.

Perry was a complicated man with a lot of talent. I highly recommend the book Stepin Fetchit: The Life and Times of Lincoln Perry by Mel Watkins for those at all interested in a under-examined part of American film history. 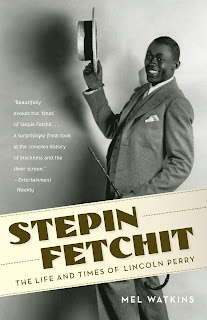 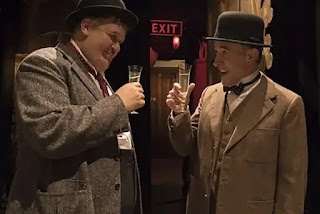 John C. Reilly as Hardy and Steve Coogan as Laurel
in Stan and Ollie

Having grown up watching Laurel and Hardy movies on television, I was real excited to go see the new film Stan and Ollie. The movie is about the comedy team's later years and tour of England and Ireland in preparation for a future movie that would never come to pass. Stan and Ollie is a movie with a lot of sadness and poignancy, but it has it's funny moments, too. I especially like when the team instinctively starts to work in comedy bits in real life situations.

Steven Coogan and John C. Reilly are both wonderful in the leads. You also really have to give credit to the makeup team for this movie for transforming Coogan and Reilly into Laurel and Hardy. The film was shut out of any Academy Award nominations, which is a shame.. 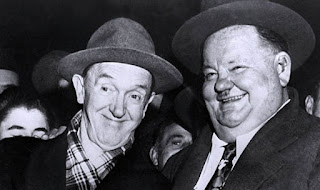 The real Laurel and Hardy in England
in the 50's

The Elephant in the Room: It's an interesting coincidence for me that I saw this movie so soon after watching Zenobia for the first time. Zenobia is mentioned in Stan and Ollie several times, we even see a recreation of Hardy with Harry Langdon and the pachyderm of the other film. In Stan and Ollie, Zenobia is referred to as mostly "The Elephant Movie" and Stan is shown as still having hard feelings about Ollie making the film without him even many years later.

Ollie (John C. Reilly) with Hal Roach (Danny Huston)
and Harry Langdon (Richard Cant) in the Zenobia scene in
Stan and Ollie
Posted by 1001: A Film Odyssey is produced, directed and written by Chris, a librarian. at 4:00 AM