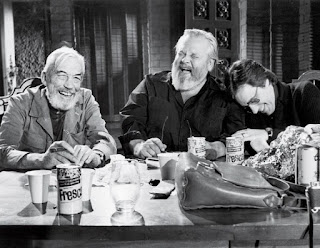 John Huston, Orson Welles and Peter Bogdanavich
during the filming of The Other Side of the Wind

The recent release on Netflix of the Orson Welles film The Other Side of the Wind is the equivalent of finding the holy grail  for many cineastes. The film was made off and on during the early seventies by Welles but has never been available for public consumption before. It is about a filmmaker (played by John Huston) who is trying to make a comeback film...or maybe just his magnum opus. Much of the film is centered around a party with other directors, critics, writers, execs, cast, crew and other hangers on. We also see a film within a film (shot in color, the rest of the film is in black and white) also called The Other Side of the Wind. 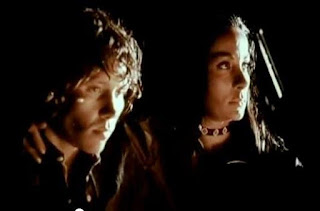 Welles' film has so many layers to it that it is hard to sometimes tell where the film begins and real life ends.Or is that the other way around?  I can see where some might call it a bit of a mess. But it is a magnificent mess that I enjoyed watching a great deal.

The accompanying documentary (Also on Netflix) They'll Love Me When I'm Dead is recommended to get some more insight into the film if you care to. Obviously, I did. It's interesting that Welles didn't cast himself in the part of the director (which he seemed to regret because it was a great part). I like John Huston in the role of the director because he frankly had a crusty machismo that I couldn't see Welles the actor conveying.

I don't know how those that put The Other Side of the Wind together for release chose what they did from the miles of available film footage or if they even made the right choices. I did like what I did see and that's what I have to go by. 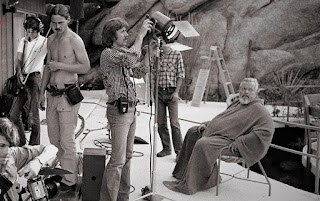 They'll Love Me When I'm Dead


If you still haven't gotten enough of Welles, you might want to catch the documentary Magician: The Astonishing Life and Work of Orson Welles to get an overview of the entirety of his life and work. 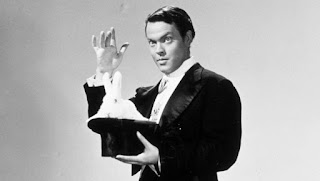 Magician: The Astonishing Life and Work of Orson Welles

And if you STILL haven't gotten enough of Welles and don't necessarily want to read a dense biography, I really think I got a lot of insight into his mind from the book-
My Lunches with Orson: Conversations Between Henry Jaglom and Orson Welles by Peter Biskind. I'm certainly glad Jaglom recorded these conversations for posterity. We see a Welles in the last years of his life, physically and financially limited, but intellectually strong and desperately trying to find a way to raise money for his hopeful screen adaptation of King Lear, which of course never came to pass. 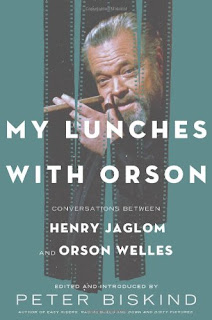