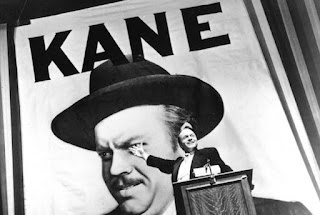 1.That great opening camera pan through what we later learn is Kane’s palace called Xanadu. A No Trespassing sign, a giant K over the main gate, giant but deserted structures and monkeys. Yes, monkeys! Where is this place? We soon find out more, but a great, moody start to the movie.

2.The often shown shot of Kane dying and his glass ball breaking. We then see the reflection of the nurse coming in and putting the sheet over the great man for the last time. 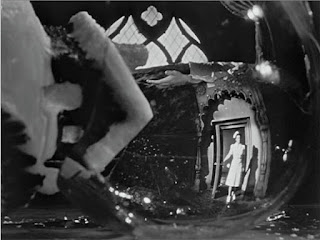 3. Number 3 is the problem moment and is the same as number 2. Kane says Rosebud, which is the catalyst for the whole movie. But who hears him say it? He whispers and the nurse is coming in from the next room. Raymond the servant later says he heard Mr. Kane says Rosebud, but I don’t trust him. Oh, well. Hamlet isn’t perfect either.

4.The entire News on the March Newsreel gives a few minute perspective of Kane’s life. A great setup for us to now see Kane’s story unfold more slowly.

5. After the News on the March, darkened and anonymous figures figuratively beat their heads to try to give their newsreel a hook. What was his last word? Rosebud. Hey, let’s find Rosebud! 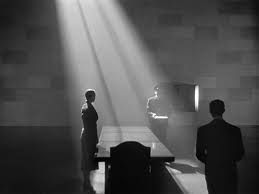 6. Not a particular moment, but all the interview subjects combined. Thatcher’s posthumous papers give information on Kane’s early life from beyond the grave. Later we see Bernstein’s reflection on the young idealized Kane. Then we see Jed Leland’s take on some of Kane’s more difficult times. Finally, we get Susan Alexander looking at the later years at Xanadu.

7. And let’s give Mr. Thompson a bit of credit. He interviews all these subjects, but like a good interviewer, it’s about the subjects. We almost forget he’s even a part of the movie, but is an important piece to the jigsaw puzzle.

8. Mr. Thompson is also part of the great library moment in the film. He goes to visit the isolated and vast papers at the Walter Thatcher library. Great lighting and sound gives this scene a dramatic, expressionistic feel.

9. And when Thompson leaves the library, he breaks the serious tone by turning to a picture of Thatcher and asking, “You aren’t Rosebud, are you?

10. When we look at Kane’s childhood, his father rants about how he doesn’t want to give up Charlie until Thatcher says how much money they will receive annually. “Maybe it’s for the best,” he now replies. 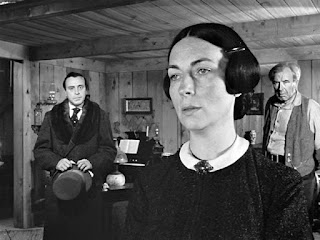 11. In Kane’s childhood scene, Agnes Moorehead is memorable as his mother who wants to do what is best for Charlie, but is heartbroken about it.

13. Thatcher reads Kane’s major ambition in an exasperated tone. “Might be fun to run a newspaper!”

14. Thatcher looks at several headlines over time to Kane’s paper (The Inquirer). Each one irritates him more and more. It also says something about Kane before we actually see Welles on screen.

15. We finally see Orson Welles as Kane. The young idealized 25-year-old Charles Foster Kane with his loyal colleagues Jed Leland and Bernstein by his side. 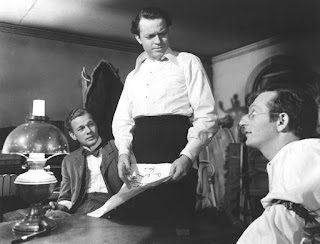 16. After Thatcher admonishes Kane for losing money on his newspaper, Kane replies that he will probably lose a million dollars every year and will probably be broke...in about 60 years.

19. Bernstein’s interview. Bernstein (Everett Sloan) pretty much worships Kane. We get to see Kane at his best through Bernstein’s lens. The kind of guy who’ll tell you you’re great no matter what. Gotta love Bernstein. 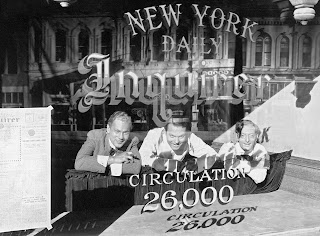 20. Bernstein talking about the girl on the ferry he saw years before. "I bet a month hasn't gone by since that I haven't thought about that girl..." (Contribution from MovieguySteve)

21. The idealistic young Kane, with Bernstein and Leland, moves furniture into the Inquirer’s offices to show that the news goes on 24 hours.

22. That great exasperated harrumphing of the old editor, Mr. Carter.

23. Kane’s Declaration of Principles. Kane promises to provide the people of this city honesty and the truth and promises to be a tireless champion of their rights. Jed Leland keeps the original copy.

24. Kane looks at his competitor The Chronicle’s newspaper men and compares himself to a kid in the candy store and six years later, they are all working for him at the Inquirer. “Today, I got my candy.” 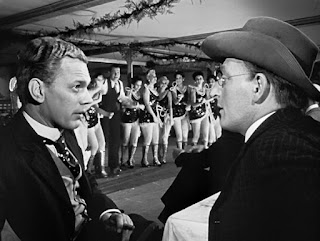 25. Kane’s celebratory stage show complete with dancing girls, musicians and that great song about Charlie Kane. “You buy a bag of peanuts in this town and somebody will write a song about you.”

26. Thompson interviews the now elderly Jed Leland in a retirement facility. Leland is more of a realist about Kane than Bernstein. Love it when he tries to get Thompson to sneak him some cigars.

27. Kane gets married and we see the famous set of shots that starts off with Kane telling his wife who is right next to him how he adores her and ends with them sitting practically across the room from each other and she is reading (gasp) The Chronicle.

28. Kane’s first meeting with Susan Alexander is actually pretty quaint. He gets splashed by mud from a carriage. She laughs at him, but has a toothache of her own. Come up to my place, etc.

29. Kane entertains Susan in her apartment with shadow puppets and by wiggling his ears. He can’t get over the fact that she hasn’t heard of him. 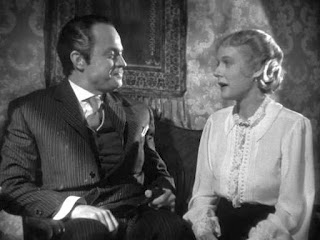 30.Susan sings for him (badly), but when she’s done Kane smiles and applauds.

31. Kane runs for governor and gives his memorable fiery speech against his opponent Boss Jim Gettys.

32. Kane goes with his wife to visit his mistress and Boss Jim Gettys. Gettys threatens to tell the press about Kane’s affair if he stays in the race. The stubborn Kane refuses to bow out.

33. Headline reads that Kane is caught in love nest with “singer.” Jed humorously adds that Kane fought to get the quotations removed from the word “singer” in reference to Susan. 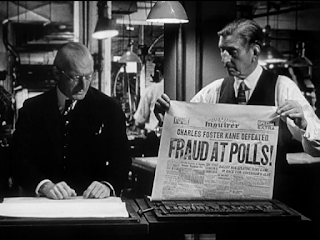 35. Bernstein shows alternative Inquirer headlines after the election. Kane Elected or Fraud at the Polls.

36. Great scene after Kane’s defeat where a drunk Jed Leland (the one guy who always told Kane the truth) tells Kane how he ridiculously talked about the people as if he owned them.
Full quote from Jed Leland-“You used to write an awful lot about the working man...He's turning into something called organized labor. You're not going to like that one little bit when you find out it means that your working man expects something is his right, not as your gift! Charlie, when your precious underprivileged really get together, oh boy! That's going to add up to something bigger than your privileges! Then I don't know what you'll do! Sail away to a desert island probably and lord it over the monkeys.” 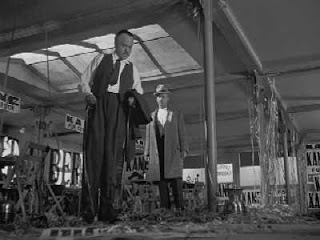 38. Susan is performing and the camera slowly pans up to the rafters of the opera house. One stagehand looks at another and simply holds his nose.

39. My favorite moment from Citizen Kane.
Jed Leland is now the dramatic critic from the Inquirer’s Chicago office. Jed has written a review on Susan Alexander’s performance and has passed out on his typewriter before he can finish. Kane happens to be visiting the Chicago paper and he and Bernstein pull out Jed’s review from underneath him. Kane sees that Jed has written a negative review of Susan and asks Bernstein for a typewriter and goes to finish it. We hear the clack of the typewriter in the next room as Kane works on Jed’s review. Jed awakens and Bernstein tells Jed that Mr. Kane is finishing the review-a bad review, as Jed had wanted. (Jed later said that Kane did this to prove he was an honest man.).
Jed approaches Kane, who says “Hello, Jedediah,” while still typing.
“Hello, Charlie,” Jed replies and adds, “I didn’t know we were speaking”
Kane laughs. “Of course we’re speaking…You’re fired.” Kane finishes Jed’s review. 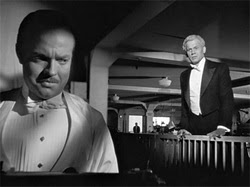 41. Jed shreds his program into paper dolls during Susan’s performance.

42. At the end of Susan’s opera performance, Kane applauds enthusiastically and at one point is the only one still applauding.

43. Kane opens a letter from Jed which includes a torn up $25,000 check and a copy of Kane’s now worthless Declaration of Principles. “An antique” he calls it before tearing it up.

44. Susan has a great tirade about all the negative comments about her singing. Kane’s only wish is for Susan to continue her performing. 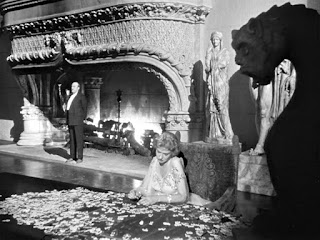 45. Kane finally reasons that Susan can’t take all the negativism coming at Susan and relents to having her give up singing. “Their loss,” He says.

46. Susan puts her huge jigsaw puzzles together in the huge and empty Xandau.

47. That giant fireplace in Xanadu! That impossibly big fireplace!

48. A simple picnic for the Kane’s involves much ado, including a huge procession of cars and circus animals!

49. Susan finally leaves him and Kane memorably trashes her room. 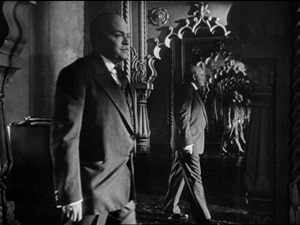 50. Kane’s famous march past his servants where we see the many reflections of the lonely and unhappy man.

51. Final thoughts from Mr. Thompson, “I don’t think any word can explain a man’s life.

52. And of course, the final shot of Rosebud.

53. The final shot of the film is the an echo of the first. Xanadu has everything money can buy, but is still desolate and lonely. 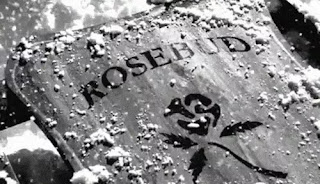