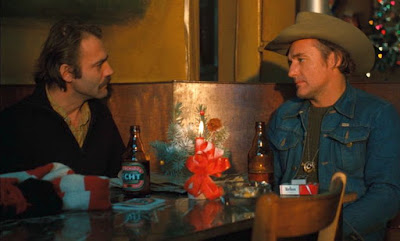 Bruno Ganz and Dennis Hopper in The American Friend

The American Friend is Wim Wenders' adaptation of Patrica Highsmith's novel Ripley's Game. Ripley (Dennis Hopper) is a forger who is hired by a mob boss to kill a rival gangster. Ripley dupes a picture framer named Zimmerman (Bruno Ganz) who is dying of Leukemia to carry out the crime for him. One of the main points of the film is that Ripley begins to actually like Zimmerman and tries to help him out all he can once he gets him involved in the messy situation.

This film is an interesting 70's version of a noir movie. I like the European setting in that many of the characters have to deal with the fact some of them only speak French, English or German and have to modify what they say accordingly. Zimmerman's dealing with lying to his family and his up and down helath reports provide additional drama. Bruno Ganz is very good and it's really Zimmerman's story more than Ripley's.

The Ripley character was earlier used in Purple Noon (with Alain Delon as Ripley), which was based on Highsmith's book, The Talented Mr. Ripley. That book was also adopted into a 1999 film with Matt Damon as Ripley. 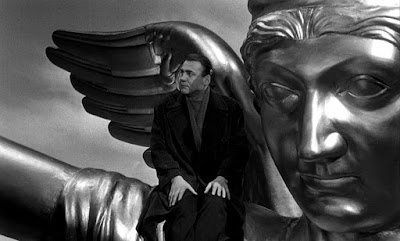 Bruno Ganz in Wings of Desire

It's nice to have someone watching over you...

Wim Wenders' Wings of Desire is pretty far away from The American Friend as far a literary source material goes. The whole point of this film according to Wenders was to show the beauty of modern day Berlin. The way he did this was to create characters and dialogue through screenwriter Peter Handke that depicted angels that could travel throughout Berlin unnoticed. We do get some wonderful shots of the city as well as tender moments from the angels that can feel the anguish of those they encounter.

The main plot involves one of the angels (Bruno Ganz again) who falls in love and wishes to become human. He gets his wish and must deal with the pluses and minuses of his new situation. The angel also bonds with Peter Falk (playing himself!) as a fellow ex-angel. The movie is moving and at times quite poetic. Wings of Desire has many devotees and was remade in 1998 as City of Angels. 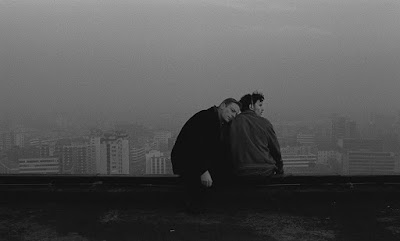 
As I was writing this, I saw the sad news that Bruno Ganz passed away on February 16th at the age of 77.
A great actor in these films and in others, including Downfall, where he played Hitler during the last days of World War II.
Bruno Ganz as Hitler in Downfall
Posted by 1001: A Film Odyssey is produced, directed and written by Chris, a librarian. at 12:35 PM