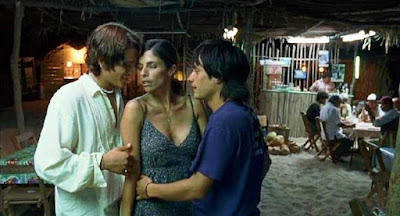 The trio embraces at the end of Y Tu Mama Tambien

Y Tu Mama Tambien is the story of two teenage boys who go on a cross country trip with an atrractive older (relatively speaking) woman named Luisa. This is the second time I've seen this and I can't say it's a particular favorite, partly because I don't find the boys particularly likable. However, the film does have plenty of good moments. The boys grow as people by the end of the movie and Luisa is largely the one responsible for this. She is only going on the trip because of problems in her marriage and health issues. Director Alfonso Cuaron is really adept at showing us what is going on on the periphery during their trip. We see soldiers marching, local conflicts and workers toiling. It does add quite a bit to the flavor to the movie. There's also a lot of sex. The movie starts with a sex scene and towards the end of the movie has a sex scene with an unexpected twist between the threesome.

Moving on...Cuaron went on to direct Harry Potter and the Prisoner of Azkaban, Children of Men and Gravity, for which he won an Academy Award in 2014. 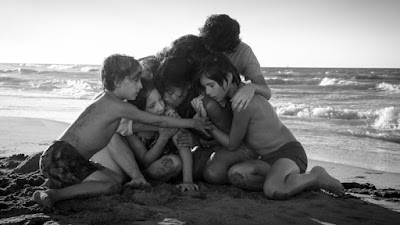 The family embraces at the end of Roma

To say the tone of Cuaron's 2018 film Roma differs from Y Tu Mama Tambien is an understatement. Where Y Tu Mama Tambien begins with teenagers having sex, Roma begins with a several minute from the ground shot of mop water being spread along a dirty surface. The whole film is understated. It's in black and white and honestly, I understand if one would say this film can be a bit on the dull side at times. It's set in Mexico on the cusp of 1971. It has been stated by the director that it is Curaon's tribute to the women that raised him.

The mother (Sofia) to the four children is important, but she has to work hard in her white collar job to earn a living, so she's away a lot. Seemingly more important to the household is Cleo (played byYalitza Aparicio) a sweet, nurturing young housekeeper who dedicates herself fully to the children.

The two major male characters in this movie aren't exactly shown in a positive light. The father is rarely seen and is usually away on business. We find out at the end of the movie that he is leaving his family (presumably for another woman). He even comes by after the break-up while the family is away to move his things out and takes the book shelves-leaving the books on the floor. If this act isn't meant to symbolize his lack of substance, I'm interpreting it that way anyway! An even worse male role model is Fermin, the martial artist who impregnates Cleo, but doesn't accept that the baby is his and derisively refers to her as "servant."

As I stated, this is a movie you really have to be patient with. There is a lot of emotional moments to be had in the second part of the movie (Cleo's miscarriage, the final embrace on the beach). I just hope you stick around long enough to get there. 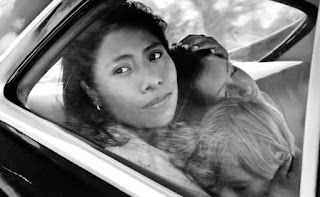 Yalitza Aparicio in Roma
Posted by 1001: A Film Odyssey is produced, directed and written by Chris, a librarian. at 10:20 PM