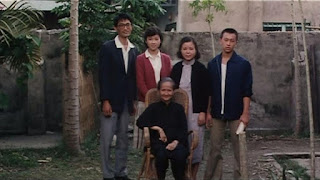 A Time to Live, A Time to Die

A Time to Live, A Time to Die is an unpretentious and largely unremarkable film that occasionally reaches unexpected depths of feeling.-Janet Maslin, September 23, 1986 New York Times.

A City of Sadness, which was clearly viewed in its own country as a huge step forward in the ability of cinema to look, finally, at Taiwan's recent past, constitutes a real turning point-a fact which also enabled the film to become a great public success-Jean Michel-Frodon,  1001 Movies You Must See Before You Die

The two films from Taiwanese director Hou Hsia-hsein watched for today have much to recommend them. They are important cinema histories of post-World War II Taiwan and the director uses the experiences of his own childhood to convey much of the story. They are also very well crafted.

That really should be the end of today's blog, but I have to be honest. I didn't really connect too heavily with either film. Well, let me take that back. I did relate to A Time to Live, A Time to Die, but that was only after getting even less connection to A City of Sadness.

The director still has my respect. And I still have The Puppetmaster still on my list to watch. There may be hope yet! I may like The Puppetmaster so much that I will go back and watch City of Sadness with fresh eyes! You never know. 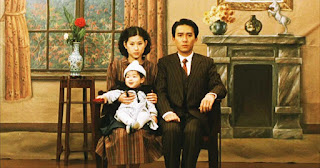 A City of Sadness
Posted by 1001: A Film Odyssey is produced, directed and written by Chris, a librarian. at 5:00 AM