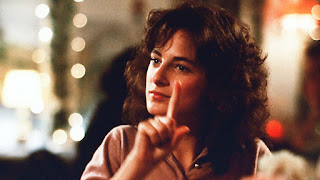 Marlee Matlin in Children of a Lesser God


The Academy Awards often gives Best Actor/Actress statues to a performer playing the part of someone with a disability. Children of a Lesser God was a success on Broadway, with the lead role of the deaf former student of the school where the action is set being played by deaf actresses. The film features the deaf Marlee Matlin in the lead. Much of what sets this above the average TV movie of the week is the good screenplay and the chemistry between Matlin and William Hurt as her teacher/lover. How much credit should we give to Matlin playing a character who is really deaf? Would it be more impressive if Meryl Streep had played the role? I'm still trying to figure that one out.

I hadn't seen this film since it was first on cable over thirty years ago. I always thought the dramatic scene when Matlin tries to talk for the first time she says "I'm not a freak!" It turns out she actually says, "I'm not afraid!" It works either way, I guess. 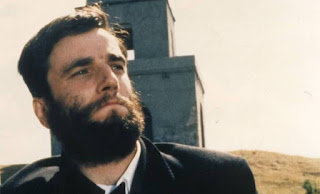 Daniel-Day Lewis in My Left Foot

Even more impressive to me is Daniel Day-Lewis's Oscar winning portrayal of Christy Brown, an Irish artist with cerebral palsy. The film itself is also impressive in the depiction of a poor, large family in Ireland. You feel Brown's struggle as he develops and you root for him during his artistic growth and feel his heartbreak as his first experience with love is not returned. As good as Day-Lewis is, his performance is enhanced by an also impressive performance by Hugh O'Connor as the young Christy Brown.

Both of these films do end with a positive romantic note for the protagonist.
Posted by 1001: A Film Odyssey is produced, directed and written by Chris, a librarian. at 6:08 AM