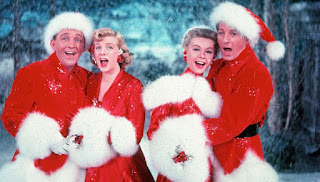 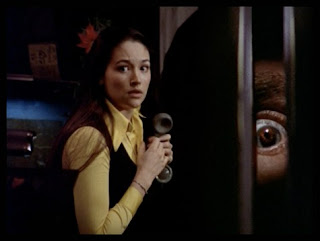 Black Christmas has a killer going around killing college girls in a sorority house.

Popularity: The lighthearted White Christmas was the biggest movie hit of 1954. It has shown up perennially on TV in subsequent years.

The not-so lighthearted Black Christmas was a minor hit in 1974 and has gained a cult following since.

The Directors: Despite the popularity of White Christmas, it is not considered to be one of director Michael Curtiz's great films. Yankee Doodle Dandy, Mildred Pierce and (especially) Casablanca fill that void.

Black Christmas director Bob Clark is remembered more these days as the director of another Christmas classic, A Christmas Story.

The leading man: White Christmas's leading man Bing Crosby was probably the most popular man in movies during the 40's and into the 50's. He didn't do too badly with records either. He had a laid back and likable style (at least on-screen) that was very appealing. Gary Giddens is writing a biography series on Crosby that has so far stretched to two volumes. I've read the first, A Pocketful of Dreams -The Early Years, 1903-1940 and it is recommended for those who like lots of details about early sound musicals and the record industry during that time.

Black Christmas's leading man Keir Dullea is best know to cinefiles as Dave Bowman in 2001: A Space Odyssey, where he plays the laconic astronaut, Dave Bowman. He shows some surprising versatility in Black Christmas by playing a temperamental artist. He also looks quite different with long hair (A little Marc Singer in The Beastmaster, maybe?).

The leading lady: I suppose you'd call Rosemary Clooney (Betty Haynes) the leading lady of White Christmas, though I find myself more of a Vera-Ellen (Judy Haynes) man.

Lovely Olivia Hussey (Romeo and Juliet) is the leading lady here and I guess you could call her one of the first "lady in distress running from a killer" roles that would be featured in many films during the subsequent decades.

Character actor alert: Ubiquitous character actor Dean Jagger plays the retired general who Bing and the gang are putting on a show for in White Christmas. Dean's hundreds of movies and TV credits include: Bad Day at Black Rock, The Robe and the "Static" episode of The Twilight Zone. He won a supporting actor Oscar for Twelve O'Clock High. He appeared with Bruce Lee in the 1978 film Game of Death.

Ubiquitous character actor John Saxon plays the detective searching for the killer in Black Christmas. He appeared in way too many movies and TV shows to name, but seemed to appear in a lot of horror and science fiction: Blood Beach, Planet Earth, Nightmare on Elm Street, Battle Beyond the Stars, etc. Saxon was also a martial arts expert and co-starred with Bruce Lee in Enter the Dragon. (Okay, I was not expecting to find a Bruce Lee connection between Dean Jagger and John Saxon, but there you have it!)

Scenes that made me think of the actor's real life: Danny Kaye is featured in a number in White Christmas called The Best Things Happen While You're Dancing. He sing-talks part of the song in a proper English accent which made me think of Laurence Olivier, who Kaye had a long-standing affair with.

In Black Christmas, the kind of wild sorority girl with the fresh mouth is played by a pre-Lois Lane Margot Kidder. It made me think of the party girl Kidder I read about in the book Easy Riders, Raging Bulls.

It's interesting that: There is a lot more snow in Black Christmas than White Christmas.

It's interesting that: (musical number). The only Christmas Carol we hear in Black Christmas is performed in the foreground while a murder is going on at the same time. Bing sings a number in White Christmas called What Can You Do With a General? that is the only song I can think of that is about enlisted men singing about how hard generals have it (at least not ironically!).

Tensest moment: At the end of Black Christmas when the killer is chasing Olivia Hussey you ask, "She's going to get away, isn't she?" (She does). At the beginning of the musical number, I'd Rather See a Minstrel Show, you ask "They aren't going to put on blackface, are they?" (They don't).

Telephone issues that we wouldn't have today: Busybody Mary Wickes overhears part of a phone conversation (by getting on the extension) that Bing Crosby is on that leads to a rift between Bing and Rosemary Clooney. The phone issue in Black Christmas is in the constant attempt to get a tracer on the line for the caller that keeps threatening Olivia Hussey.

Questionable plot points: White Christmas has a lot of them, which you are supposed to ignore because this is a lighthearted musical, but when Rosemary Clooney leaves Bing Crosby at the Inn in Vermont for New York and seems to have an elaborate stage show set up there virtually overnight for her to star in only to return with Bing to perform in time for Christmas...it strains credulity even in context...best to not think of it too much.

Black Christmas-When you know there is a series of murders occurring and people keep coming up missing, you might want to search the attic in the sorority house since you're investigating the crime and you're already in the damn house! There might be a dead body or two up there and they've probably been up there almost the whole movie!

Miscellaneous trivia: Black Christmas has been remade twice, including a version released this month! If you're ever at trivia night and you are asked what movie did Bing Crosby first sing White Christmas, the answer is Holiday Inn (1942).

Poster art: I've always really liked the poster for Black Christmas with the tagline, "If this picture doesn't make your skin crawl, it's on to tight!" 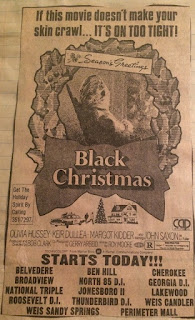 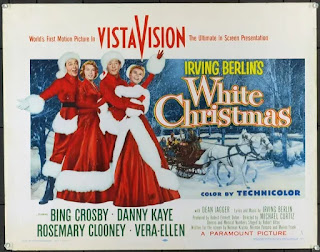 The White Christmas poster points out that this film is in VistaVistion, a wide screen experience you can't get on your little black and white 1954 TV!


Merry Christmas!
Posted by 1001: A Film Odyssey is produced, directed and written by Chris, a librarian. at 3:30 AM