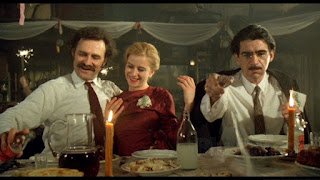 Underground is a loud, epic story of Yugoslavia seen through the eyes of two friends and their female companion starting during the time of World War II and going through the Cold War and culminating in the Yugoslav wars of the 90's. The title comes from one of the friends creating a fantasy underground world that many of the citizens live in and do not know that WWII is over and therefore safe to come out! This isn't a perfect film by any means, but I do really get a feeling of the country of Yugoslavia/Serbia here and I'm glad this one popped up on Kanopy recently. 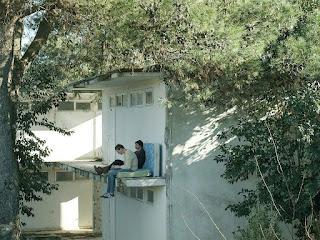 All the Cities of the North

As I was thinking of a movie to pair with Underground, another Serbian movie popped up on Kanopy called All the Cities of the North. A review on Rotten Tomatoes from reviewer Robert Koehler states that "we should measure the films greatness by asking someone who has seen it whether or not they could compare it to anything else." I was intrigued enough to watch.

What we have with this film is mostly three guys living in what appears to be an abandoned building surrounded by pretty much an abandoned city. We see them do mostly menial tasks: washing dishes, taking showers, making fires or even sleeping. When they get bored, they wrestle. The movie contains no on-screen dialogue. We do have voice-over narration every ten minutes or so and gets some hints about the abandoned city and some esoteric philosophy about princes and some other musings that are listed in the credits as being from a Jean-Luc Godard film. All the Cities of the North. isn't for the faint of heart or someone waiting for these characters to do something! The jury is still out with me on this one.

Oh, and I do have a movie to compare it to: Too Early, Too Late. Except in All the Cities of the North the "action" is dramatized and not in the form of a documentary.
Posted by 1001: A Film Odyssey is produced, directed and written by Chris, a librarian. at 2:55 AM