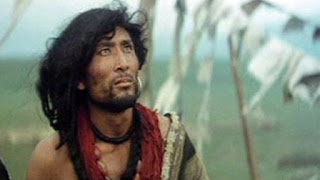 Sometimes the circumstances and mood aren't quiet right to see a certain movie.

The Horse Thief is Tian Zhuagzhuang's story of a poor rural man in Tibet who tries to take care of his family. It starts by him stealing a horse, which isn't ultimately enough to save his dying young son. We see a lot of religious rituals in the greater society and mostly hardship and strife in the context of the family of the man, his wife and son. We don't get to here much dialogue either.

I watched this film in five parts on the Daily Motion website. Perhaps I should have waited to find it on DVD as the frame froze up more than once during my viewing. I watched parts of it more than once, but it wasn't really connecting with me the way that it perhaps could have. 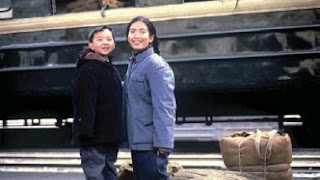 The same director's The Blue Kite has plenty of dialogue and is set in a specific time, starting in China at the time of Stalin's death in 1953. The film depicts a lot of suppression by the Communist ruling elite for the main family in the film, which got Zhuangzhuang exiled from making films in China and the film banned. The most interesting part of this film is the succession of men in the life of a young woman and her son named Tietou. The struggles of each man in making the family is slightly different and all are hampered by the Communist regime. Tietou eventually runs out of father figures and is taken away by the state to a somber image of a blue kite. I could honestly get my teeth into this one a little more that The Horse Thief, though The Blue Kite also wasn't without some slow parts. 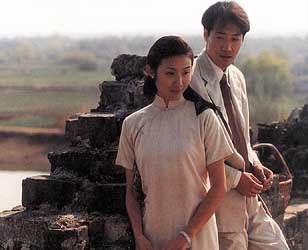 Springtime in a Small Town is Zhuangzhuang's remake of  the 1948 classic, Spring in a Small Town, The new film has a couple of strikes against it right off the bat. First, it is a remake of a beloved movie (at least in China) that doesn't have a lot of action elements for the film to update to begin with. It also has to balance the line between being faithful to the original while being distinctive enough to justify a reason for remaking it. Color photography also seems like a drawback here.

I find this remake to have merit despite these drawbacks.  It is interesting to note the similarities between this film and the original and note where director Tian Zhuangzhuang decided to make some changes. Springtime in a Small Town is worth seeing, but the original alone may be enough for some viewers who may not want to make a second trip into the rubble.

I would probably concede that The Blue Kite is the best film of this trio of films, but I probably liked Springtime in a Small Town the most.
Posted by 1001: A Film Odyssey is produced, directed and written by Chris, a librarian. at 12:53 PM