Kamau Bell and Kevin Avery host a podcast called Denzel Washington is the Greatest Actor of All-Time Period! That's a pretty bold statement, but I'll look at his two Oscar winning roles and try to make a determination. 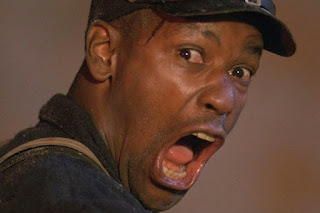 Glory is the story based on the writings of Union Captain Robert Shaw (Matthew Broderick) who leads the 54th regiment, one of the first black regiments that fought for the Union during the Civil War. The film depicts the struggles of the regiment to be taken seriously and culminating in the bloody battle of Fort Wagner in 1863. It is a very well done and inspiring epic.

Performances: The regiment includes Morgan Freeman (the leader), Andre Braugher (the intellectual) and Jihmi Kennedy (the wide-eyed innocent), and Cary Elwes (as Shaw's right hand man). They are all good. The real surprise to me is Broderick, who has never been a favorite of mine but really shines as the young commander here.

Washington on your side: But today's blog is about Denzel Washington. He plays Silas Trip, the most cynical of the troop. You wonder in the early scenes how he is going to be able to come together with the rest of the troop in the end, especially after being whipped as a deserter by his own outfit. Washington never loses his inner strength and resolve even in the scene where he is getting beaten. Of course, he does conduct himself like a soldier at the end, dying in battle, and helping in his own way to turn the tide of the war. I can't fault Denzel's Oscar here as he's undeniably a huge screen presence. (Next case) 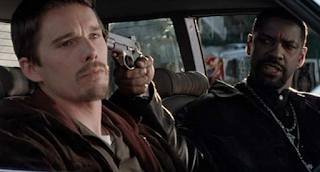 Training Day features Denzel in a dominating performance as an Alonzo, an L. A. cop with a rookie named Jake (Ethan Hawke) trying to make peace on the streets of the city. Or is he? He's a tough guy, but it's Denzel, you got to like him, right? He plays fast and loose with the rules, but he's got to do that, right?

Then he sets up his drug contact (Scott Glen) and shoots him at point blank range and tells Jake to take the credit (or blame) for the shooting. This is dirty pool, but maybe we can justify it by the fact that he gets a bad dude out of circulation. Right?

Then the final setup has Alonzo setting up Jake to be executed by some hoods as Alonzo escapes with stolen drug money to pay off the Russians, who have threatened his life if he doesn't. Jake escapes before having a battle with Alonzo and Alonzo is forced to walk away without the money. In the final scene, Alonzo is ambushed by the Russians and killed.

Washington on your side: Having a star with the toughness and likability was essential here as the final double cross comes as a surprise. Denzel handles it well and he's hard to look away from even when he's doing something really awful. Another Oscar for Denzel. I can't argue with this one either.

Training Day didn't make the 1001 book, maybe because there are some plot elements that may be a bit far-fetched even in the context of the film. Jake just happening to have the ID of the cousin of the guy who is about to kill him because Jake saved her from getting raped earlier in the day and the guy calls her to confirm it all while Jake has a gun pointed at his head comes to mind. But don't think about some things too closely.


Dear, Kamau
He's certainly one of the best. I may have to listen to more of your podcasts to be persuaded definitively. 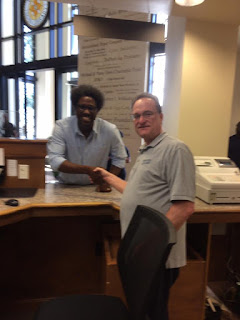 Kamau Bell and I discuss the relative merits
of The Pelican Brief and the last
season of St. Elsewhere
Posted by 1001: A Film Odyssey is produced, directed and written by Chris, a librarian. at 2:26 AM