We made a mistake...We underestimated the kind of insanity that seven billion dollars worth of bombing could do. 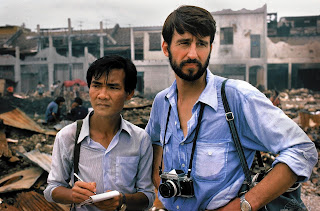 Haing S Ngor and Sam Waterson
in The Killing Fields

The Killing Fields is the moving and tragic story of the U. S. involvement in Vietnam and more specifically the story of the escalation of the war in Cambodia as seen through the eyes of two journalists, Sydney Schanberg (Sam Waterson) and Dith Pran (Dr. Haing S. Ngor, who won an Oscar for this). A gripping film throughout and one I certainly thought was deserving of its accolades when I saw it at the theater upon release. Seeing it again (Thirty-five years later!) I find the relationship between the two journalists the core of the film, with much of the second half involves Pran trying to get out of Vietnam several years later. The final scene is one that definitely brought tears to my eyes.

Definitely one for the see once in your lifetime list and if you haven't seen it in thirty-five years, one to watch a second time! (Putting on my viewing queue for 2054.)

Oliver Stone's Salvador features journalists in another hotspot, El Salvador, during the early 80's. Roustabout journalist Richard Boyle (James Woods) and his friend Dr. Rock (James Belushi) travel to El Salvador where the reckless but talented Boyle runs into all sorts of stories to cover assuming he gets out of it alive. Part of the problem is inherent within the country, but much of that problem can also be related to how the United States handled things there.

Boyle also runs into a fellow photojournalist (John Savage) whose penchant for getting in harm's way to get the perfect photo eventually costs him. The film is a fictionalized story of true events, and depicts historical events within it, including the assassination of Archbishop Moreno and the murder of four American missionaries by Salvadorian militants. 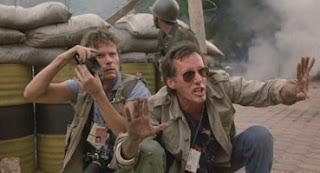 Other 80's films featuring journalists in hotspots include Under Fire (Nicaragua) 1983, Cry Freedom (South Africa) 1987 and The Year of Living Dangerously (Indonesia) 1982.
Posted by 1001: A Film Odyssey is produced, directed and written by Chris, a librarian. at 12:26 AM