Colonialism: Control by one power over a dependent area or people 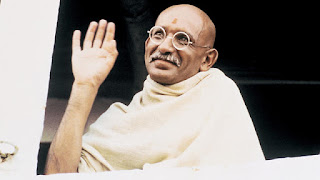 Gandhi is the epic three-plus hour retelling of the life of Mahatma Gandhi. It mentions in the opening credits, that they can't tell everything about this life in so short of a space, but they do hit most of the highlights. We see Gandhi when he was a young lawyer in South Africa and and the roots of his non-violent movement. We then see in later years his struggle against the rule of the British empire and how he essentially defeats them through resistance. (Not passive resistance, as he states that he has never been passive about anything).

Academy awards went to director Richard Attenborough, screenwriter John Briley and to Ben Kingsley for his iconic portrayal of Gandhi.

I think the film still resonates as an impressive epic work that should be seen. Whether or not it sugar coats things about Gandhi and avoids things that may be less positive is another matter. Gandhi has the look and feel of one of the great David Lean films which leads us to... 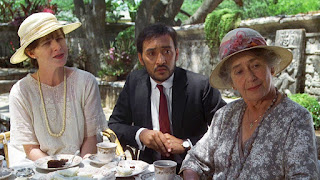 Judy Davis, Victor Banajee and Peggy Ashcroft
in A Passage to India

...A Passage to India which was the last film directed by David Lean and is based on the book by E. M. Forster. The plot involves a Brit named Adela (Judy Davis) who is traveling to India with her future mother-in-law Mrs. Moore (Peggy Ashcroft). They befriend a local doctor named Aziz (Victor Banagee) who takes them on an picnic with many others to a cave where a series of unfortunate events leads to an accusation of rape by Adela against Dr. Aziz. Much of the last half of the film deals with the trial of Dr. Aziz and the truth coming out.

This large scale film is admirable in a lot of ways, but it doesn't quite hit the notes of Lean's greatest work (Lawrence of Arabia) or even Gandhi for that matter. Admittedly, that's a pretty high standard and this is still a recommended film and one I had never seen before now. I also haven't read Forster's book, but if I get on an anti-colonialism book kick (I have before), I may pick it up.

Academy Awards went to supporting actress Ashcroft and to Maurice Jarre for his impressive score. 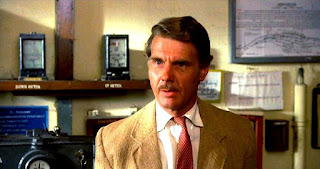 James Fox in A Passage to India

The Saeed Jaffrey factor: Jaffrey plays the role of Patel in Gandhi and Hamindullah in A Passage to India. 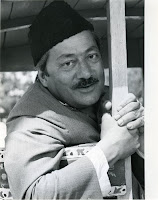 Saeed Jaffrey in A Passage to India