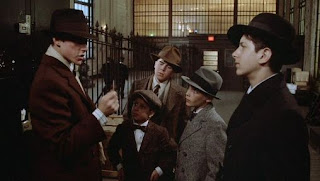 The kids of Once Upon a Time in America...

Sergio Leone's Once Upon a Time in America depcits a group of Jewish kids growing up in the mean streets of New York during the 19-teens. The kids are led by Noodles (played as an adult by Robert De Niro) and Max (played as an adult by James Woods).  Noodles commits a murder against a rival gang member and has to spend a stretch in prison. When he comes out, he re-enters the prohibition underworld where Max is a big time operator now. Their relationship is complicated by a mutual love interest named Deborah (played as an adult by Elizabeth McGovern). A lot of the plot, which changes timelines often, has the older Noodles (in 1968!) looking for Deborah and Max, who may or may not be alive.

Leone makes great films but he doesn't make perfect films. There are issues with the timeline here and the rape scene between Noodles and Deborah throws the whole movie emotionally out of whack. However, the degree of difficulty with the plot and high-wire he films this on is extremely high and it works quite well for the most part. It wasn't commercially successful but it does have many fans (myself included). Leone's body of work is pretty sparse overall, so enjoy the ones you can, I say. This includes the first two of Leone's Once Upon a Time Trilogy, the first being Once Upon a Time in the West and the second being the very underrated Once Upon a Time in the Revolution (aka Duck, You Sucker aka A Fistful of Dynamite).
. 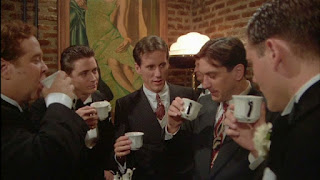 ...grown up in later scenes I hadn't seen Scarface (1983) since it's initial release thirty-five years ago. One reason for that was that it really rubbed me the wrong way during this first viewing. The violence seemed too over-the-top and I really didn't find any characters in the film particularly sympathetic, especially Al Pacino's Tony Montana. Would someone kill this guy already!

But since then, I've seen the original Scarface (1932) and it made me appreciate the remake a little more in how it blended in some of the original plot points into it (Tony's relationship with his sister and best friend). Seeing Scarface '83 again, I did appreciate Pacino as Tony. He completely transforms himself into this Cuban madman and is a totally different kind of gangster than Michael Corleone. And he's not 100 percent bad as he refuses to blow up a car with two young kids in it...Better than nothing I guess. Scarface '83 still isn't going to be on my list of favorites, but I admit it has had a lot of staying power in popular culture, so I won't argue against it being in the 1001 book. 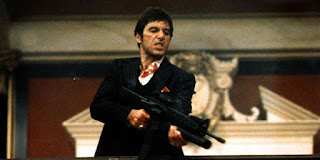