And the nominees from on the entries released in 1935 from every edition of 1001 Movie You Must See Before You Die are...
Captain Blood
Mutiny on the Bounty
A Night at the Opera
The 39 Steps
Bride of Frankenstein
Top Hat
Peter Ibbertson 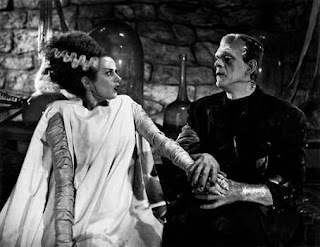 I had to call into question the basic structure of my memory palace when it comes to The Bride of Frankenstein when I revisited it after many years. I had certainly seen it, but only vaguely remember Dr. Frankenstein’s mentor/associate/rival/villain Dr. Pretorious. I don’t remember Pretorious’s experiment of growing little people in specimen jars, either! Anyway, many film historians prefer this one to the original. I’m a little torn between the two. Boris Karloff pulls off his fractured speech scenes well, but I still like the rawness of the original. So it goes. That being said, I bypassed the original a few days ago and I'll give Bride the award for this year as kind of a cumulative prize for Frankenstein and Bride of... 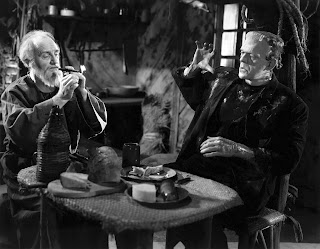 And the Award for Unique and Artistic Picture of 1935 is...A Night at the Opera 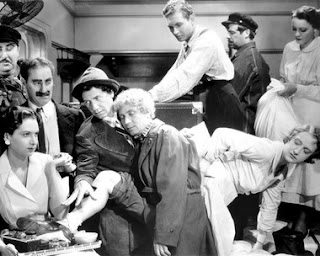 
When the Marx Brothers left Paramount studios and went to MGM in the mid-thirties, their first film at the studio is often considered by many to be their finest.

But I shouldn't quibble, the Marxes only made a handful of films and just a couple of great ones.
And A Night at the Opera is certainly on the short list. Whether or not it belongs in this category is certainly debatable, but given the rather limited choices the book presents, it seemed like the best choice. 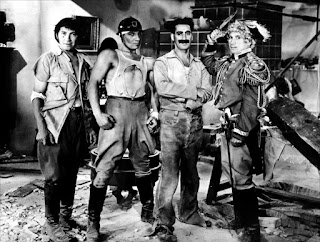 Duck Soup
Posted by 1001: A Film Odyssey is produced, directed and written by Chris, a librarian. at 2:00 AM