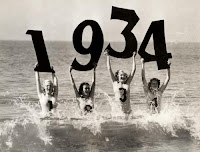 And the nominees on the entries from every edition of 1001 Movie You Must See Before You Die are...
It's a Gift
Triumph of the Will
L'Atalante
The Black Cat
Judge Priest
It Happened One Night
The Thin Man
The Goddess 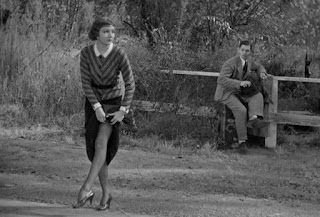 Frank Capra's It Happened One Night is the romantic comedy prototype for all romantic comedies that followed. The plot has a spoiled runaway heiress (Claudette Colbert) and a cynical newspaper (Clark Gable) reporter finding each other on the road. She wants to get to New York. He wants a story. They bicker. They bond. They fall in love. My favorite scenes are the ones in the auto camp where the two begin to bond and conspire to avoid detectives on their trail. A must for film buffs. There are certainly contenders on this list (It's a Gift is my favorite W. C. Fields movie), but I can't quite knock It Happened One Night out of the slot it actually won for 1934. 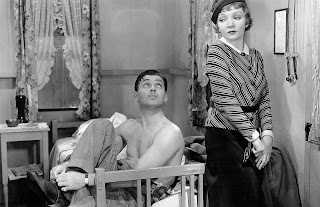 And the Award for Unique and Artistic Picture of 1934 is...Triumph of the Will 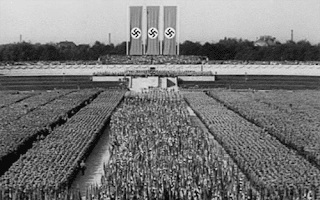 Leni Riefensthal's documentary Triumph of the Will was commissioned by the Nazi Party and filmed at the Nazi Party Congress in Nuremburg and included excerpts of speeches from high ranking Nazi officials as well as showing off the power of the Third Reich and how the people so gleefully (at least that's the way it was presented) accepted them. Understanding that Triumph of the Will is a propaganda piece, the film still is a record to a horrifying moment in time that needs to be seen. L'Atalante or The Goddess are definitely contenders here, but the significance and execution of Triumph of the Will puts this one over the top. 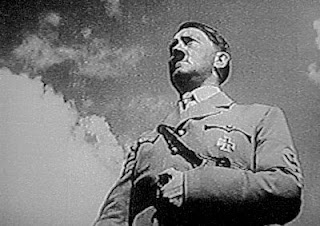 Triumph of the Will
Posted by 1001: A Film Odyssey is produced, directed and written by Chris, a librarian. at 9:58 AM