Fargo may be my favorite movie of the Brothers Coen. Which is a bold statement, since I like just about all of their movies (Though I wasn't overly enamored about A Serious Man).

But why is Fargo my favorite? Is it the plot? No, I love the plot, but most Coen movies have a pretty kooky plot.

Is it the fun local charcters? Yah, yah. Maybe. But I don’t think that’s what puts it over the edge.

Is it the performances? William H. Macy, Frances McDormand, Steve Buscemi and are all good, but I don’t think it makes it number one in my book.

Is it funny? Yes, but may not be overall as funny as Raising Arizona or The Big Lebowski.

So what is it?

A: I think it’s the humanity. You have characters (Jerry Lundegaard and the two hit men) who never seem to consider doing things the right way or give a second thought about killing someone. And then you have characters (Marge Gunderson, her husband and most of Brainerd) who never seem to consider not doing things the right way.

Continuing the previous thought to the final scene. Marge is taking one the surviving kidnapper (Carl) off to jail. She has the saddest of looks on her face as she tells him that she can’t understand why he would cause so much mayhem just for a little money. The scene strikes me as very poignant, because Marge will never fully understand someone like Carl and Carl will never understand anyone like Marge. Anyway, the ending leaves me a little teary eyed, I admit. 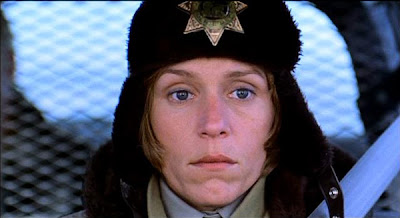