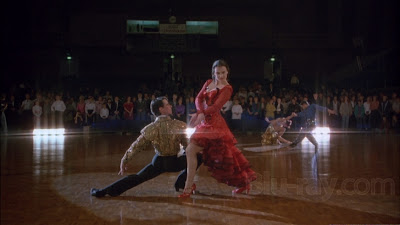 With thirty posts this month, I do need to keep some of them short. Well, crap. By going on about how I need to keep this short, I ended up going on and making it not too short. Okay, lets just say this Australian dance movie is an undeniable crowd pleaser and leave it at that.

Oh and one more thing…Bill Hunter

The late Bill Hunter seems to show up in a lot of Australian movies that have popped up on this list. He plays a rather nasty dance judge here. He also showed up as an officer in Galipoli, but is probably best known as Muriel’s father in Muriel’s Wedding.

This post can no longer be labeled as short.

What's next on the list? Lars Von Trier'sBreaking the Waves. What's that about again? Never mind. I need to save that for tomorrow.

Once again: Post can no longer be called short. Moving on. Moving on.
Posted by 1001: A Film Odyssey is produced, directed and written by Chris, a librarian. at 11:40 AM