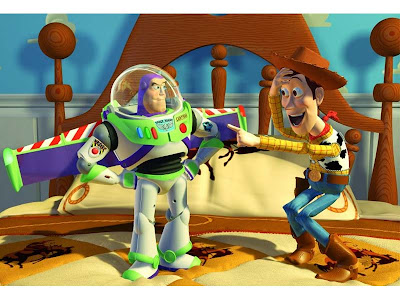 John Lasseter’s idea for Toy Story sprang from a belief, which he and Steve Jobs shared, that products have an essence to them, a purpose for which they were made. If the object were to have feelings, these would be based on its desire to fulfill its essence…As for toys, their purpose is to be played with kids, and thus their existential fear is of being discarded by newer toys. So a buddy movie pairing an old favorite toy with a shiny new one would have an essential drama to it, especially when the action revolved around the toys’ being separated from their kid.
-From Steve Jobs, the biography written by Walter Isaacson.

The rocky path to Toy Story is well documented in Isaacson’s book, but I think most that have seen it would agree that it was well worth the trip. How could you not love the story of Woody, Buzz Lightyear and the rest of the toys? If you don’t, what’s wrong with you? The two subsequent Toy Story movies are just as good, if not better. And if the ending of Toy Story 3 doesn’t bring a tear to you eye, then once again I ask, what the hell’s wrong with you?

John Ratzenberger appreciation society: The former postman from Cheers seems to pop up in every single Pixar movie. Here he plays the Ham pig.

Wallace Shawn appreciation society: I’ve noticed that the My Dinner With Andre and Princess Bride star has showed up in bit parts in several 1001 movie listings (All That Jazz, Atlantic City, Manhattan) and here he shows up as the Res, the timid dinosaur.

Don Rickles apprecation society: I can't imagine anyone who would have been a better Mr. Potato Head than Mr. Rickles.
Posted by 1001: A Film Odyssey is produced, directed and written by Chris, a librarian. at 11:33 AM