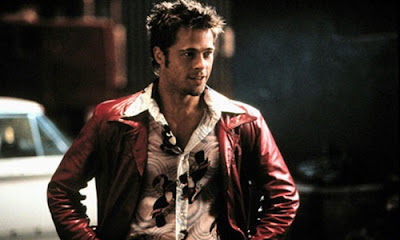 I am Joe’s raging bile duct.

I went through a period of reading most of Chuck Pahlinuck’s books (Choke, Invisible Monsters, Diary, Lullaby, etc.) about ten years ago. I did like most of them, but thinking back on it now, they tend to all sort of run together (What was the plot of Lullaby again?). The exception to this morass of confusion is Fight Club, whose adhesion to my memory is more than partly attributable to do with the movie of the same name.

What was Fight Club really about? Was is it really about Terrorism? Consumerism? Male bondng through violence? The need for community by joining groups? Getting to see Meatloaf with breasts? I’d say probably a little of all of the above (Except maybe the Meatloaf with breasts part). I’d also say David Fincher (and screenwriter Jim Uhls) did an admirable job of bringing this tough book to the screen. The two leads of Brad Pitt and Edward Norton also seem perfectly cast.