There is a central plot in The Player about filmmaker Griffin Mills (Tim Robbins) receiving threatening letters and being involved in a murder, but the main appeal of this movie is the overall dynamic by which the Hollywood system operates. How do movies get made? How do studios justify spending millions of dollars on film production when they usually have no idea if a movie is going to be successful or bankrupt the studio? That question isn't resolved of course, but it's a lot of fun to see it played out here.

There are dozens if not close to a hundred cameos and bit parts played by some of the most famous movie stars alive at the time this movie was made, but I think special mention should go to two lesser known players. One is Richard E.Grant, who plays a passionate screenwriter who makes a detailed pitch to Griffin about a movie that is art and uncompromising in nature and…Cynthia Stevenson as Griffin’s put upon girlfriend who is the one character who truly seems to stand for something in this film. We, the audience sympathize with her, but nobody actually in the film seems to.

This is probably my favorite Altman not made in the 70’s.

...and you got to like any movie that has dialogue between characters who have just seen the movie Freaks.

...and has some of those same characters going to a screening of The Bicycle Thief. 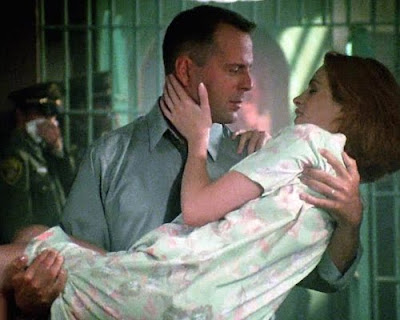 Bruce Willia and Julia Roberts in The Player's non-existent film-within-a-film Habeas Corpus
Posted by 1001: A Film Odyssey is produced, directed and written by Chris, a librarian. at 11:20 AM