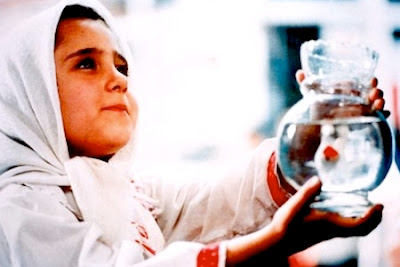 Is this a movie about nothing or a movie about everything? A seven-year-old (though she looks five as the script points out) Iranian girl is obsessed with the idea of getting a goldfish. She already has goldfish, but she wants a big, fat one. After a lot of whining and crying, her mother gives her money and sends her off by herself to the man who sells the fat ones. Questionable parenting-but there’s no plot without her going off by herself. She runs into all sorts of problems, from snake charmers to the fact that the man with the fish is a little on the shady side. She loses her money down a sewer and the movie spends a great deal of time showing her and her brother, who has now joined her, trying to get the money back. So is this a movie about something insignificant? A spoiled little girl who wants something she doesn’t need. Or about something really significant? That little girl getting the only thing in her world that really means something to her? I think significant, for let those of us who have longed for something seemingly unimportant cast the first stone.

Just an observation: The ending, which has many of the characters in the film criss crossing past the camera’s stationary main shot reminded me of the George Harrison music video for When We Was Fab. I bring this up for no reason in particular.
Posted by 1001: A Film Odyssey is produced, directed and written by Chris, a librarian. at 3:31 PM