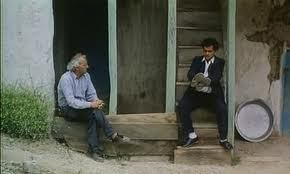 Through the Olive Trees

Intesting thing about art films. Sometimes you get them or you don’t. I didn’t like Through the Olive Trees nearly as much as the same director’s Close-Up. What was Through the Olive Trees about again? A director was shooting a movie, or at least one scene from a movie over and over again, the boy had a crush on the girl in the scene and she totally ignored him and the village where the movie was being shot had just gone through a catastrophic earthquake. My thoughts on this one are pretty jumbled, but in all fairness, so is the movie. But this movie may fall into that odd category of “I thought it was good, but I didn’t like it very much.” But after Close-Up and Through the Olive Trees I am still looking forward to the last two Klarostami movies on the 1001 list, so at least that says something.
Posted by 1001: A Film Odyssey is produced, directed and written by Chris, a librarian. at 3:27 PM